Barry Underwood’s work is a reaction to a culture that believes it can manipulate the landscape to its whim. He re-envisions sublime natural landscapes, combining photographic processes with site-specific installations. The photographs that document these temporary incursions combine tones of sober reality with a child-like sense of wonder. Accidental and incidental light interact with a landscape, creating marks on film, and eventually, photographic paper. The lights disrupt the familiarity of a landscape and create a psychological space of unrest within a placid, serene scene.

Sarah Kabot’s work similarly undermines the presumed stability of a site. Rather than looking at the picturesque, she engages with spaces that are homely and familiar. The sculptures and installations she creates systematically replicate objects that exist at the periphery of attention—ceiling light fixtures, electrical outlets, window frames and the like. The recreations, installed near to their “real-life” forebears, create a glitch within the manufactured environment. For her installation at Johansson Projects, Kabot will work with photographs, spray paint and mylar, to create strange interpretations of the gallery architecture.

Planet Times “Trojan horse for the environment” December 15, 2022 Yoo Si-yoon
“In many cases, I regard my work as a kind of poetic interpretation. This is because it ultimately and implicitly aims to change people’s perception of their environment by using a form of visual paradox.” LINK

Ohio Arts Council “Governor’s Awards Artist Addresses Environmental Themes in Nature-Inspired Photos” January 27, 2020 Amanda Etchison
“Underwood said his approach to creating his photographs begins with research into the history of a location and how the landscape has evolved over time. He considers how certain environments have been depicted by artists who have come before him, and he ponders the impact human civilization has had on the surroundings…” LINK

Art Pin “Barry Underwood Uses Light-Emitting Objects To Capture Stunning Images” July 1, 2015 Brittany Krupski
“Each installation is a reflection of his immersion into a location, as well as his research into the agricultural, industrial, and recreational uses of the landscape. They tell a story about the historical context of each site, and the possible repercussions of unchecked human intervention.” LINK

The Weather Channel “You’ve Never Seen Photos of Naature Like These: Barry Underwood’s Electric Landscapes” June 25, 2014 Terrell Johnson
“I am working in the art historical context of landscape; be it painting, land art or cinema. Landscape allows for a certain type of storytelling. The history of landscape is encapsulates the ideas of the sublime nature, humankind’s power over nature, and nature’s power over humans. My attempt is to portray environmental issues that are not delivered in a heavy-handed way.” LINK

Huffington Post “Electric Landscapes Reveal The World’s Most Pressing Environmental Issues” June 13, 2014 Priscilla Frank
“Underwood coaxes stories from landscapes as if they were hidden spirits waiting to be unleashed. His singular process raises questions about everything from light pollution to the conventions of theater, all the while blurring the line between nature and artifice.” LINK

Colossal “Landscape Light Installations by Barry Underwood” May 21, 2014 Christopher Jobson
“The artist utilizes LED lights, luminescent material, and other photographic effects to create fleeting abstract landscapes that are influenced by both accidental and incidental light.” LINK

ArtHopper, “Sisyphus, Hercules and Barry Underwood” April 10, 2013 Lane Cooper
“Taking a cue from theater and film, Barry Underwood transforms the world into a place of surprise and unfettered possibility. Accomplished not through digital chicanery but through a force of will that smacks of Herculean effort or Sisyphean endurance, Underwood’s photographs are the visual equivalents of literature’s Magic Realism.” Aaaaaa/.d LINK

designboom, “Landscape Light Sculptures by Barry Underwood” March 7, 2012
“Underwood gauges the potential for ethereal illumination of familiar landscapes by infusing the spaces with sculpted light. The artist first searches for an outdoor location, then infusing this natural environment with glowing objects, the light and color enables an abstract quality to overtake the ordinary natural surroundings. Underwood’s efforts result in a surrealistic cinematographic or theatrically-minded photographic story.” LINK

Beautiful Decay, “Barry Underwood’s Light Art Installations” March 6, 2012 Amir
“Inspired by cinema, land art, and contemporary painting, the resulting photographs are both surreal and familiar. They suggest a larger narrative, and yet that narrative remains elusive and mystifying.” LINK

Juxtapoz, “Feature: A Conversation with Barry Underwood” August 30, 2011 Jasmine Cabanaw
“Humankind has left a variety of footprints on this planet. Barry Underwood examines the effect of light pollution on natural landscapes in a series of photographs that feel ethereal and fantastical, despite being rooted in reality.” LINK

London Times, “Spectrum”  January 3 2010
“Ten pages showcasing the word’s most innovative photography. This week where beauty and bionics meet. From Sausalito to Connecticut one man’s installations show the most stunning areas in North America in a whole new light…Underwood takes special measures to limit the environmental impact of his work. He uses LED lights and recycled material whenever possible, and ensures that each location is completely restored to its original state after shooting.”

BLDG Blog November 16th 2009 Geoff Manaugh
“The juxtaposition of spectacular landforms and immersive forested environments with subtle networks of lighting effects- and the accompanying idea that there might be a power source shining away somewhere deep within the natural world- even brings to mind Archigram’s for a deep woods electrical outlet disguised inside and artificial log.” LINK

Gizmodo November 17th 2009 Mark Wilson
“His landscapes, while painstakingly staged, incorporate man-made light with an almost eerie naturalness. The glowing elements that should jar our eyes as an electrical protrusion  actually serve to capture nature with a new thesis: as a planet intrinsically altered by our footprint, though, not in the we’ve destroyed our planet and things are too late kind of way…” LINK

Engineer’s Daughter December 14 2009
“The watery theme (as well as a flair for the dramatic) continues in Barry Underwood’s bewitching staged photographs in which he inserts light sources into otherwise natural settings. In his photos a school of LED fish swim just under the surface of a lake, a fiery red fissure opens down the center of a trail multi-colored sprites infest an old parade field.” LINK

DG Design Network Quotes BARRY UNDERWOOD
“These images are long exposure photographic documentations of full scale installations that are build on site in specific landscapes. Approached through a theatrical sensibility, the pieces intermingle concepts of contemporary painting, cinema and land art. Issues of illusion, imagination, narrative are investigated as is the potential of the ordinary to be transformed into the extraordinary through light and composition.” LINK

A Photography Blog, “Photography and Theater with Barry Underwood” November 30 2009
“Underwood has degrees in both theater and photography and it shows. These are called “scenes”, and they are spectacular.  LINK 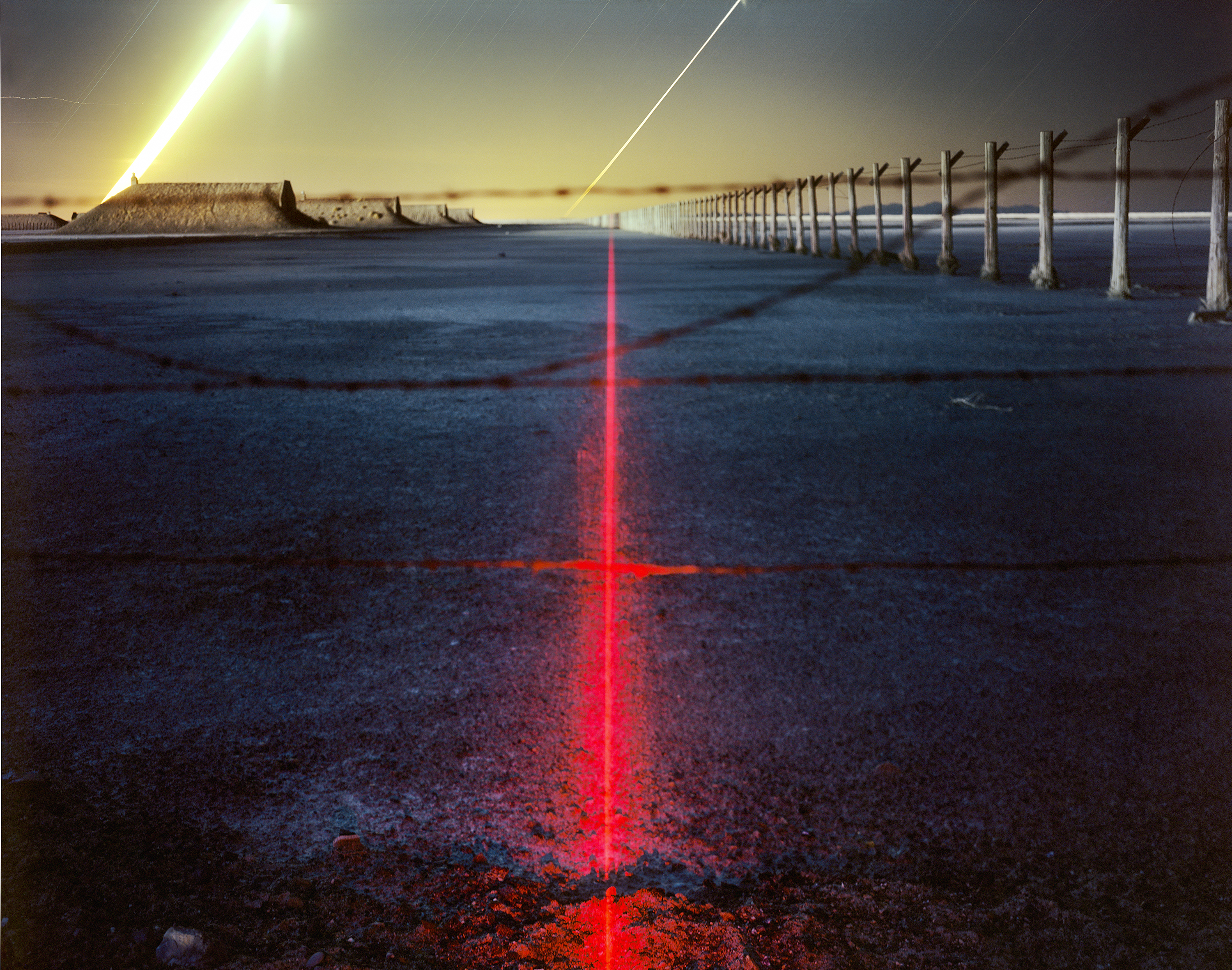 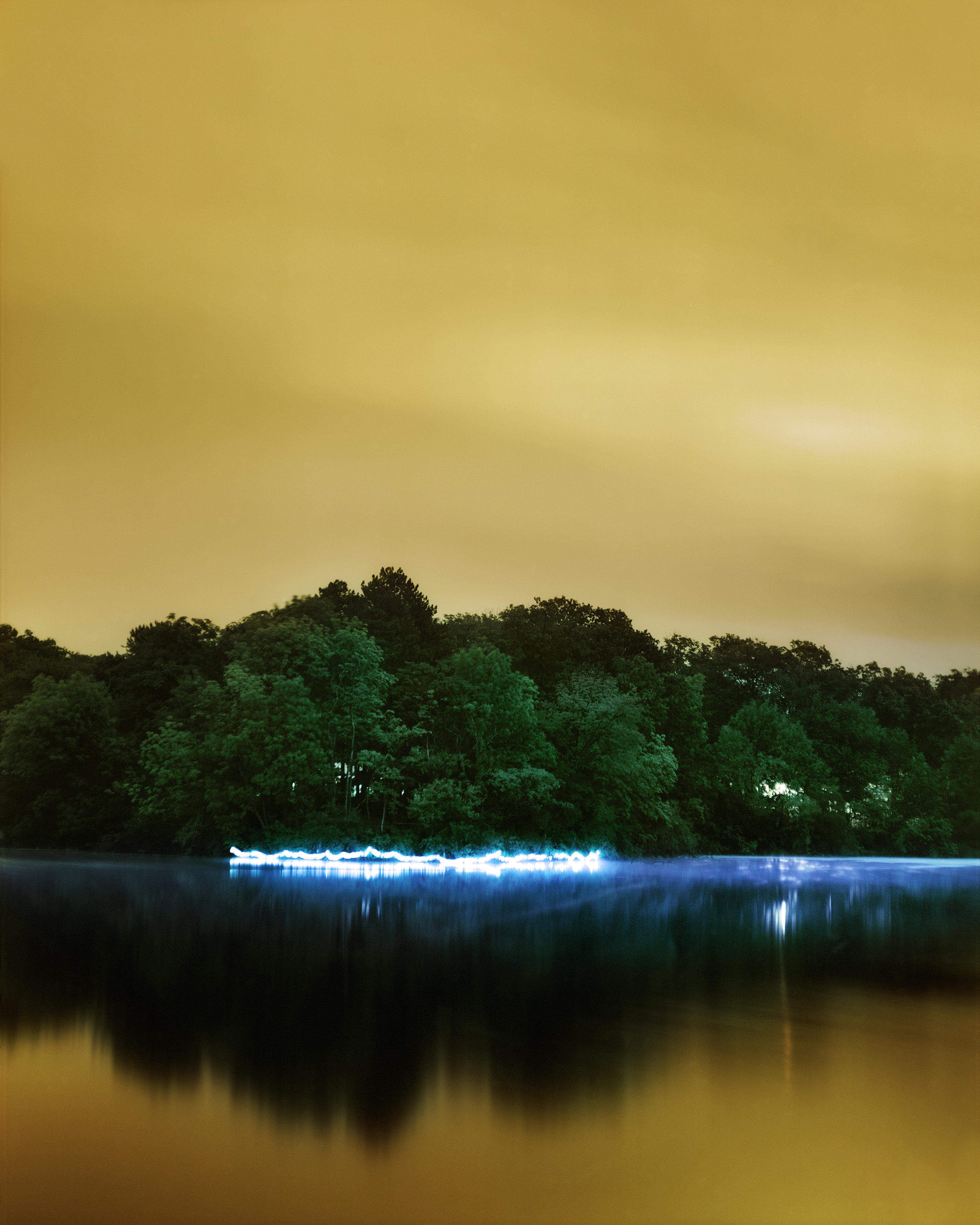 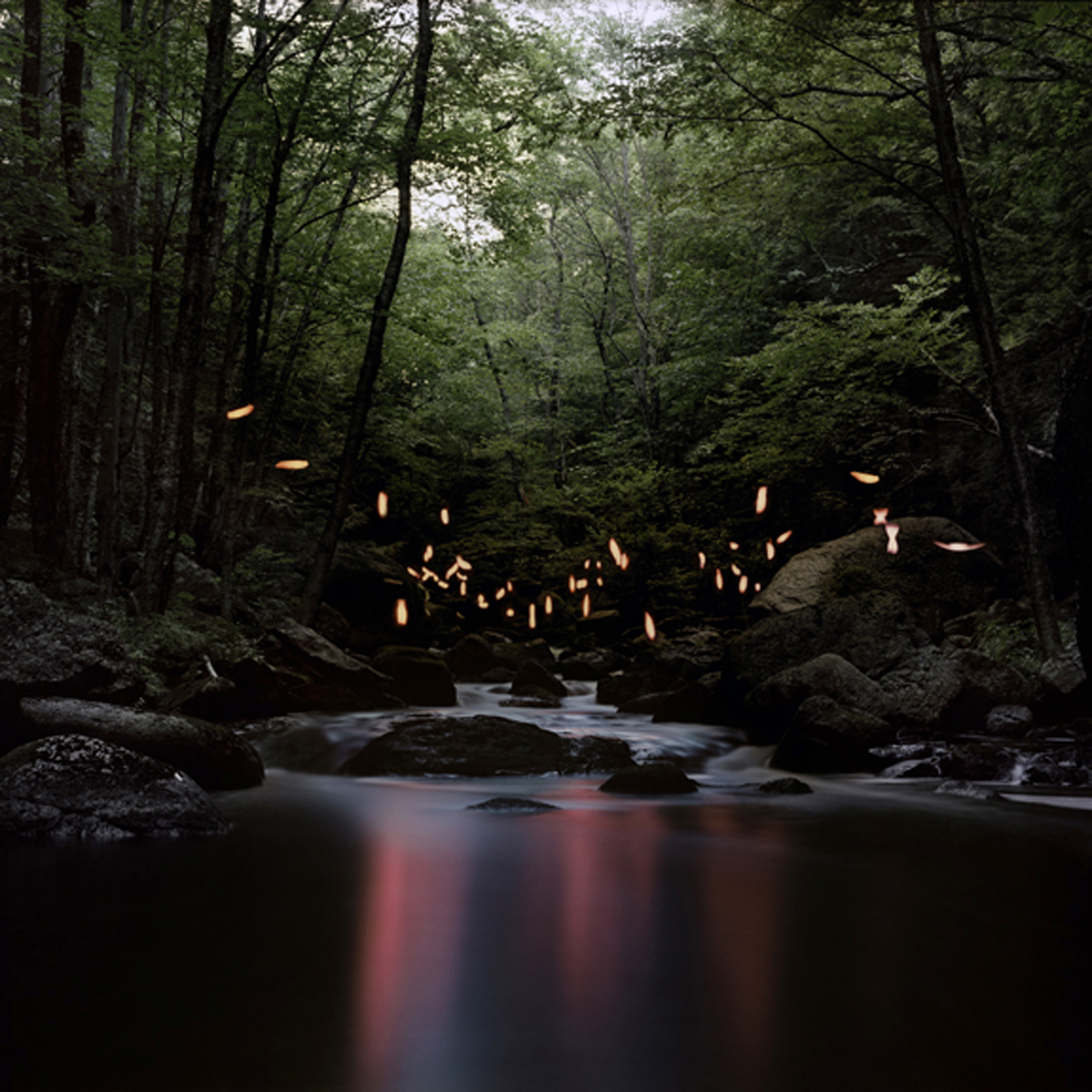 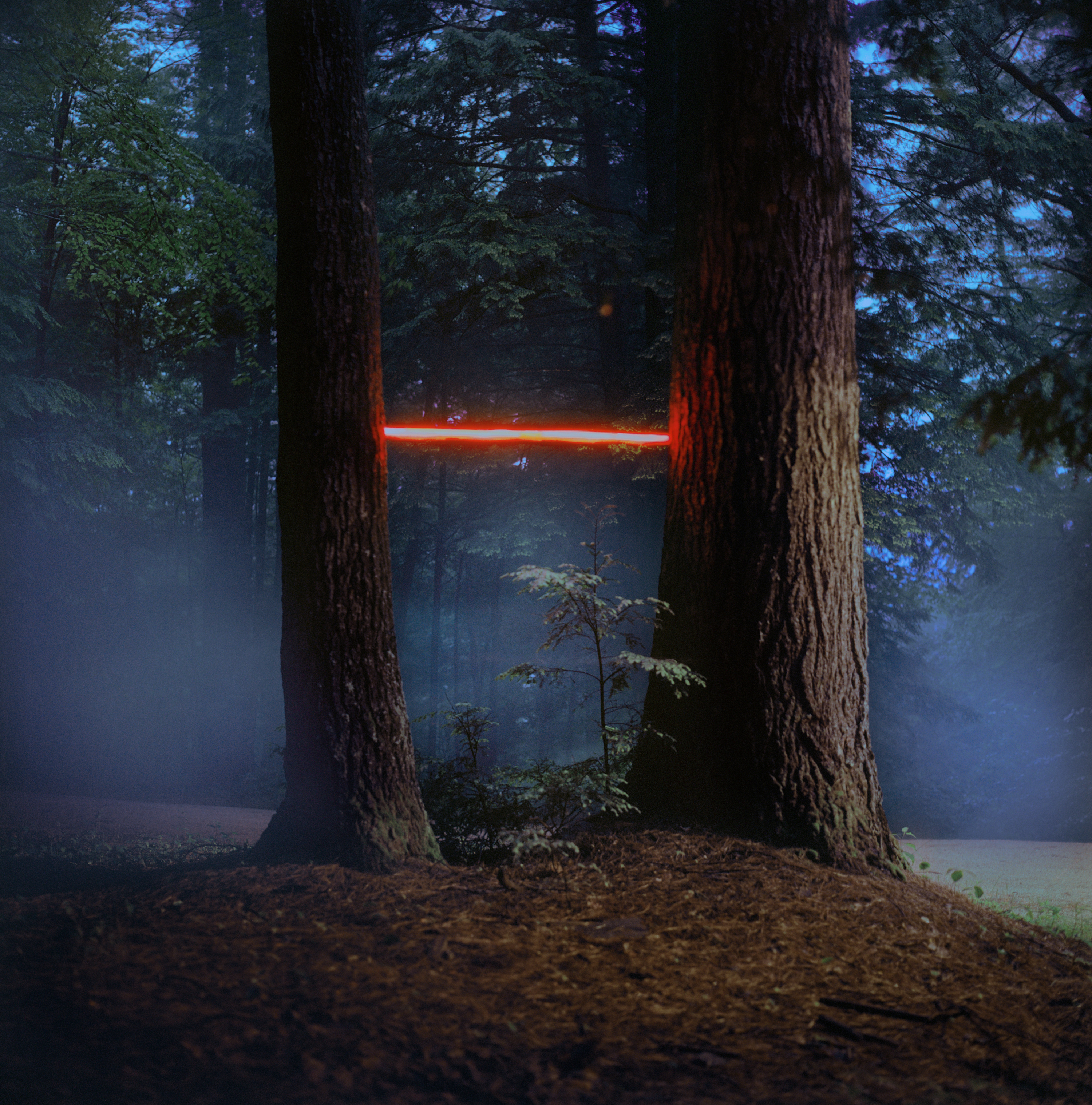 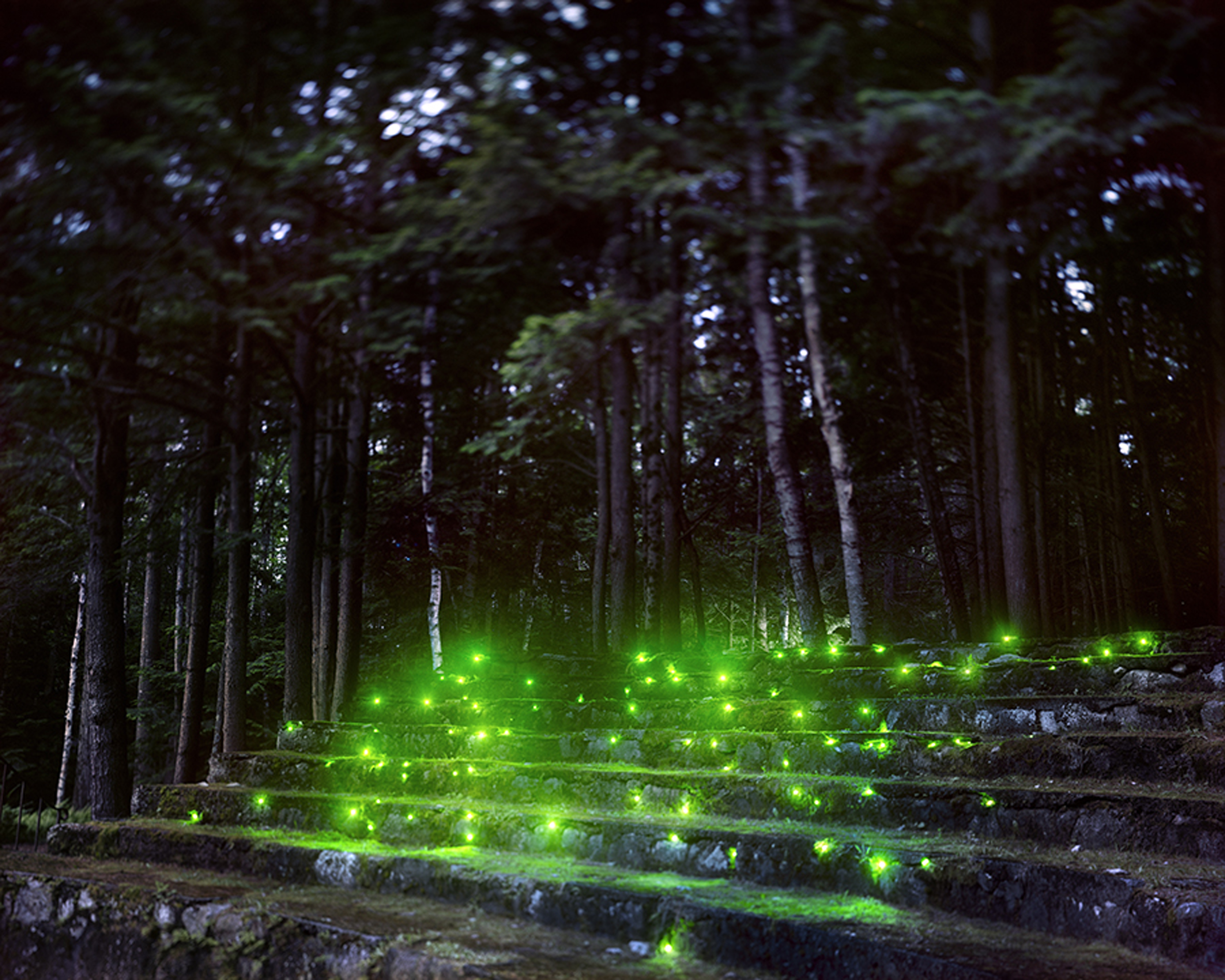 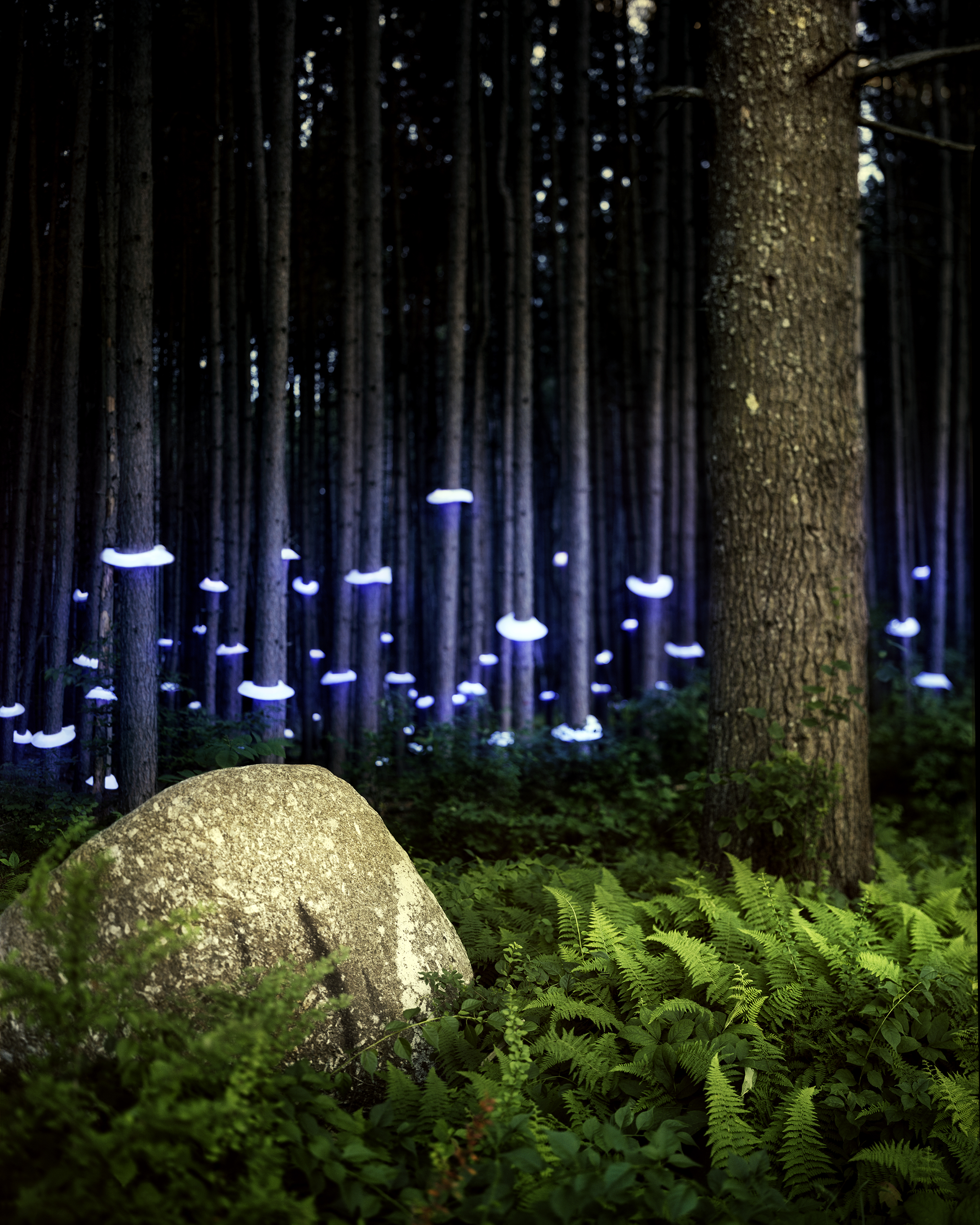 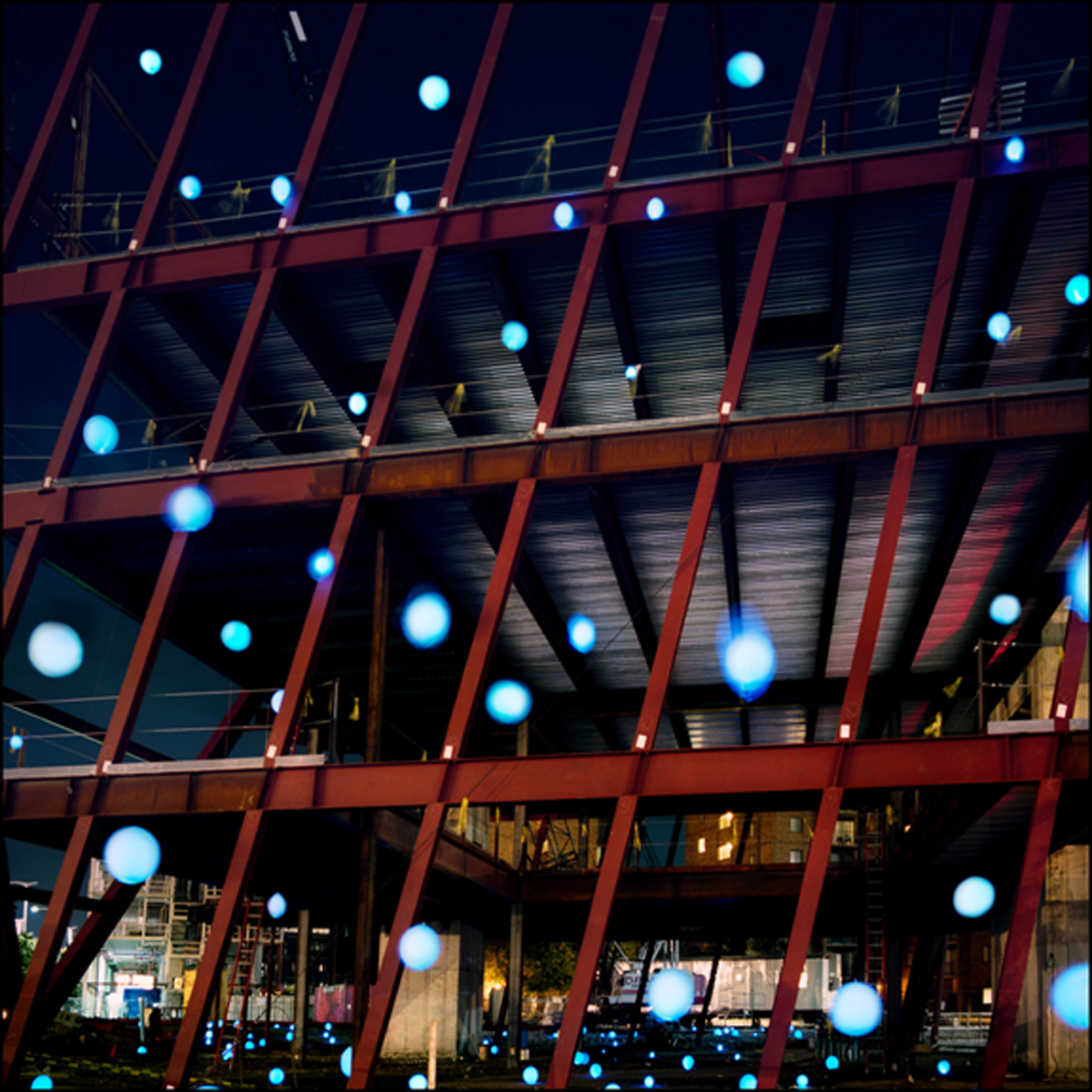 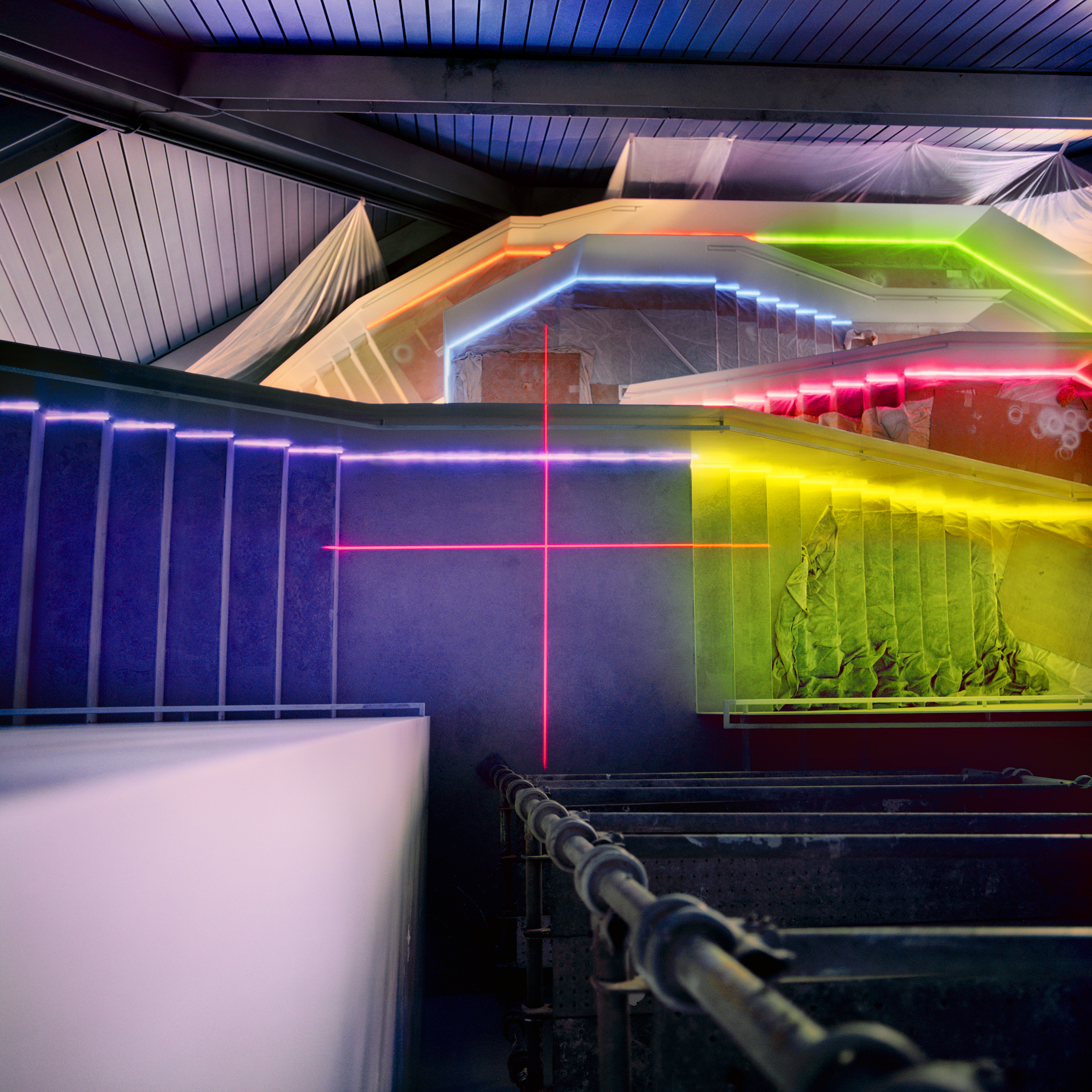 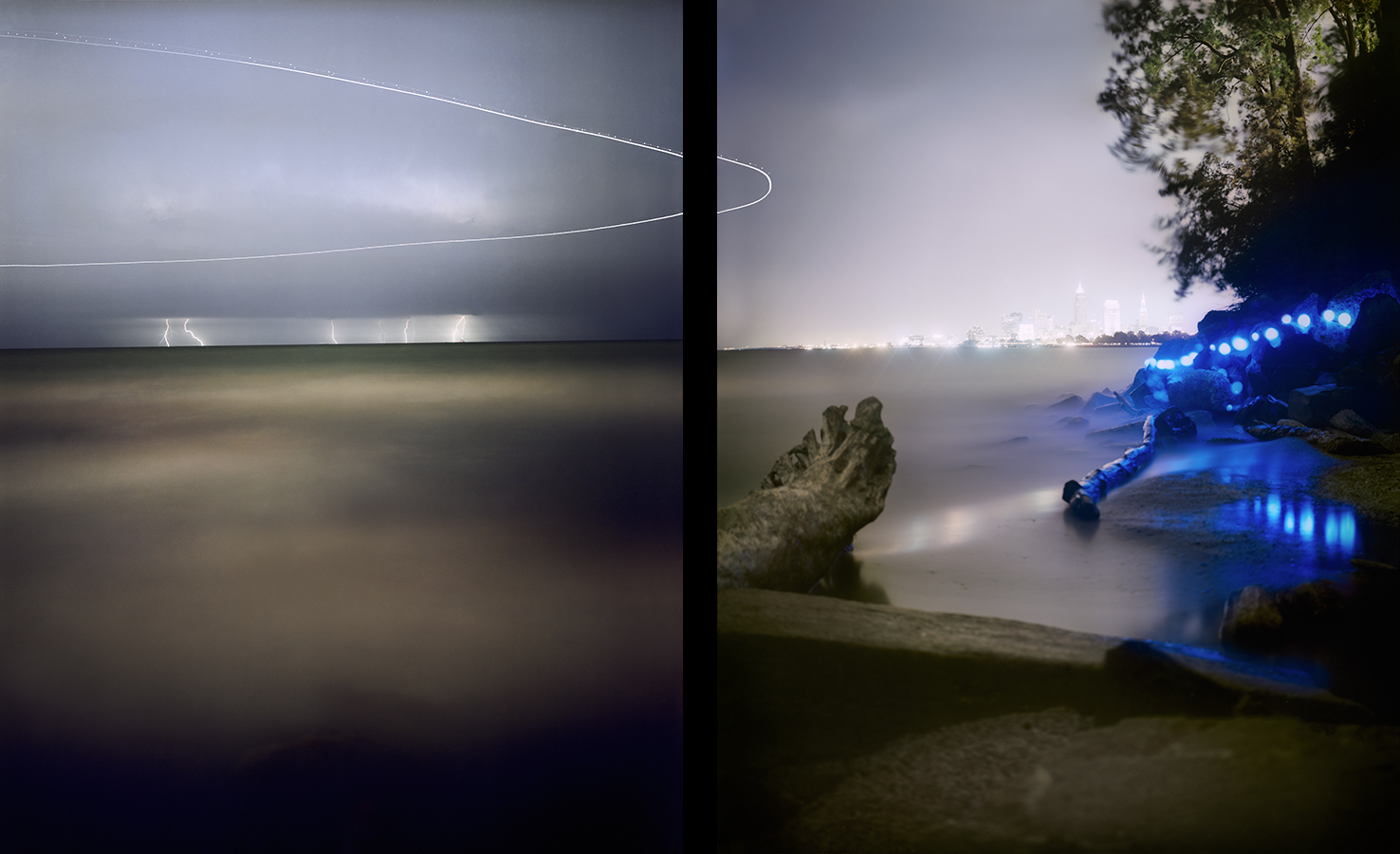 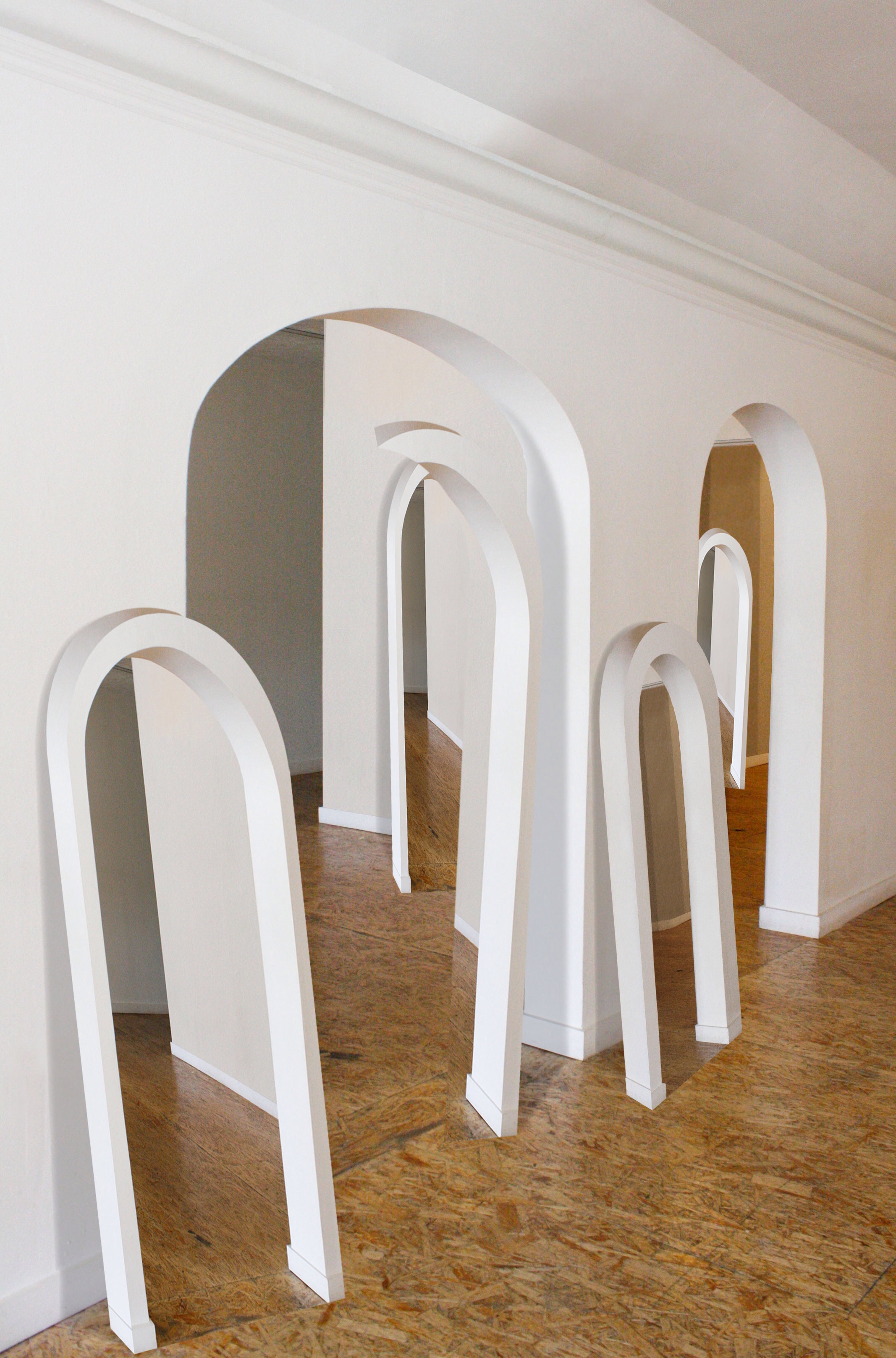