Inspired by the ancient Chinese myth of the Immortal Peach Garden, where peaches represent longevity and prosperity, and combining that with the sexualized symbols that they are in American pop culture, Lu transforms these peaches into beautifully grotesque, other worldly forms. Bright bold colors draw the viewer in closer, only to realize the fruits are fermenting – existing in the space between good and bad.

Fidler is a conduit for energy, narrating the force emitted from a person or place. She creates portraits of women who reside among the trees, train to battle future catastrophe, and stand guard of their world seated upon stoic horses. Their riotous dances and open armed gestures speak to connection with one another and the land, hands held high in praise and determination for independence. These figures Fidler paints are feminists– derived from Mary Wollstonecraft, Mary Shelley, and Isadora Duncan—those who have influenced the way we think, write, and move, those with radiant energy that push the world forward, those with vision to help reshape the world.

Anna Fidler’s Energy Portraits: We, Too, Are Vibrant Matter

Can you feel it? They are gathering. Under the moon. On the dance floor. In libraries and artist studios and kitchens. In the woods. In the dark. Their crowns enormous. Their wings unfurled. Spell casters. Makers. Dreamers. Taking the limits of what you thought was possible and stretching them wide.

Anna Fidler’s Energy Portraits make the invisible visible. And in a time when the small-minded and the narrow-visioned insist they can describe the world, Fidler’s reminder that there is always more to see reads as resistance.

Energy Portraits marks a formal change in Fidler’s work. Gone are the transparent washes of watercolor that have formed her backgrounds for years – instead, now, flat bright color, red and black and white, informed by her years teaching color theory. What at first seems still is not. Like blood pumping, like the movement inside the trunk of a tree, like racing thoughts, in Fidler’s works, paint moves from the center out. It vibrates.

Fidler is a builder of bodies. Her figures are accretive, topographical, sculptural. She creates portraits that are not about the way a person looks. She has abandoned traditional ways of seeing, setting for herself the challenge of capturing a being’s energy or spirit. Fidler is fascinated with mysticism and its hope that within this world there is another world, electric and good and powerful – and she has gifted her viewer a kind of second sight. In “Nightside of the Earth,” a figure stands under double slivers of orange moons. Fidler reveals to the viewer what would otherwise remain hidden: blue dots shining from the figure’s hands, from her back, a crown of energy emerging from her head – a gift of transformation, secret magic, the possible renovation of the world.

In Vibrant Matter, the philosopher Jane Bennett writes about enchantment, the vitality of all material, the “shimmer and spark” of gloves and pollen and sticks. Everything is alive, Bennett insists, and if humans were to remember that aliveness, then the world – and how we choose to live in it – would look quite different. Bennett highlights “the strange dimension of matter,” what she calls (following the philosopher Hent de Vries) “the absolute.” But rather than appealing to the absolute to guarantee certainty or fixity or surety, Bennett engages the absolute to trouble what we think we know. She breaks the word into its component parts: ab (off) and solver (to loosen). “The absolute,” Bennett writes, “is that which is . . . on the loose.” It is what cannot be captured. What transcends. Wildness.[i]

When I read Peter Wohlleben’s The Hidden Life of Trees and learned that trees can hear and remember and communicate, the world was not the same. Trees talk to one another, send messages and warnings by air and root and soil. When a neighbor tree is cut down, Wohlleben writes, the remaining trees, bereft, continue to send nutrients to the stump long after her body has been carried away.[ii] This is the kind of enchantment of the natural world that has been on display in Fidler’s previous work. Like Bennett, she reminds her viewer of a world on the loose, of its wildness and magic, of its grief. Yet, here, in this new work, Fidler grants that enchantment to humanity itself – a generous act in these alarming times. Remember? her work asks its viewers. We, too, are vibrant matter. We belong here. And we have everything we need to remedy the disasters we’ve been courting.

In “Moon Queen,” an antlered majestic figure opens her arms under a crescent moon and a pink full moon. Looking at this painting, I remember that before there was Moses, there was the Moon Goddess. Before those stone tablets full of rules on Mount Sinai (which means “Mountain of the Moon”), there was a stone pillar where she was worshipped.[iii] The horns of cows and bulls and goats and oxen looked like the crescent moon, so these herd animals were viewed as sacred. Horned crowns were worn by warriors, leaders, and priests.[iv] Some ancient paintings of Mary show her standing on the horn-shaped sliver of a new moon. But patriarchal Christianity soon reversed the meaning of that crescent: instead of the crowns of goddesses, horns became the sign of the devil. In Energy Portraits, Fidler has turned the crown right side up again, rendering every body, every beast, holy.

It is not only energy that Fidler reveals in her paintings. She has also made visible historical figures, who have been forgotten or overlooked, all of them women. For decades, Fidler has studied women who have changed the ways we think and move. Some of their names are known – the dancer Isadora Duncan, the healer and artist Emma Kunz, the abstract painter Hilma af Klint, the Spiritualist watercolorist Georgiana Houghton – and others names have been lost: performers, costumed bodies on stage, spectacle makers, visionaries, mediums, women living beyond the constraints of their times and having fun while doing it.

In Vibrant Matter, Bennett engages Theodor Adorno’s concept of nonidentity – an elusive, uncapturable force that nevertheless acts on us: “We knowers are haunted, [Adorno] says, by a painful, nagging feeling that something’s being forgotten or left out.”[v] What do you do with this feeling? Do you try to squash it? Do you insist the world is exactly how you’ve defined it – enemy, stranger, migrant caravan that must be met with locked gates and tear gas? For Adorno, the ethical challenge is to learn to accentuate this haunting feeling. To remember that “life will always exceed our knowledge and control.”[vi] Only then will our rage relax. Only then will we remember to welcome what we do not yet understand.

Fidler’s figures are abstractions, silhouettes. She is influenced by Hilma af Klint, who created radically abstract paintings in 1906, “bold, colorful, and untethered from any recognizable references to the physical world,” well before Kandinsky or Malevich or Mondrian, those male artists most often credited with abstraction’s invention.[vii] Deeply involved with Spiritualism and Theosophy, af Klint painted to reveal her mystical view of reality. It is at once both an act of blocking and an act of pointing to – a double move that is visible in Fidler’s paintings, too. Fidler reduces forms to their essential elements, while at the same time suggesting the uncapturable more, the beyond that is right here.

Abstraction works, at least in part, like redaction, that practice of blocking out or removing text or images or information. I understand redaction to be a theological enterprise, and I see its evidence in Fidler’s paintings. In “My Arrow is a Torrent of Light,” three figures stand ready, bows drawn, arrows aimed – but at what? At whom? And where? The background is black, the figures nameless. Redaction is a visual reminder of the limits of our knowing, a sign of the ongoing and necessary failure of language to describe a god (or a plant or a starfish or a person), who must, by definition, elude all attempts at apprehension. Like Fidler’s abstraction, redaction does double duty: it works as a reminder of the failure of representation and as a reminder of representation’s ability to point beyond itself. Redaction shows viewers they are not seeing the whole, that there is always misinformation and missing information, that every image is made up. It can also function as protection or cover, hiding the pictured subject from the viewer’s gaze. Redaction undermines the supposed certainty of the words and images we use, whether those words and images are used to generate memos authorizing torture or laws that put children in cages or images that construct the enemies we’re told to fear or peace treaties that can end wars.

The figures in Energy Portraits are time travelers, at home in the past and the present and the future, belonging everywhere at once. In “Queer Belongings,” theorist Elizabeth Freeman writes that the word belong comes from the Old English gelang, which means “alongside of” or “at hand.” Freeman links belong to the Middle Dutch langen, which means “to be or seem long; to think long, desire; to extend, hold out, offer.” A longing to belong is a longing to be long, Freeman writes. To want to belong is to long “to be bigger not only spatially, but also temporally, to ‘hold out’ a hand across time and touch the dead or those not yet born, to offer oneself beyond one’s own time.”[viii]

Fidler offers her viewers this kind of belonging. She holds out her hands – bearing paintbrushes and blades and paper and paint – to the revolutionaries who came before her and to those who will follow. In “We Should Meet in Air,” three figures dance under a red moon, their arms raised, the black and white rays of the background shimmering. They could be anywhere, anyone, in any place. They could be you, right now. Fidler’s work is urgent: This time will not bind us, it says. In our studios and in the woods and under the moon and in this very place and time, we might still be free.

ii. Wohlleben, Peter. The Hidden Life of Trees: What They Feel, How They Communicate: Discoveries From a Secret World. Vancouver, BC: Greystone Books, 2016: pg. 16. 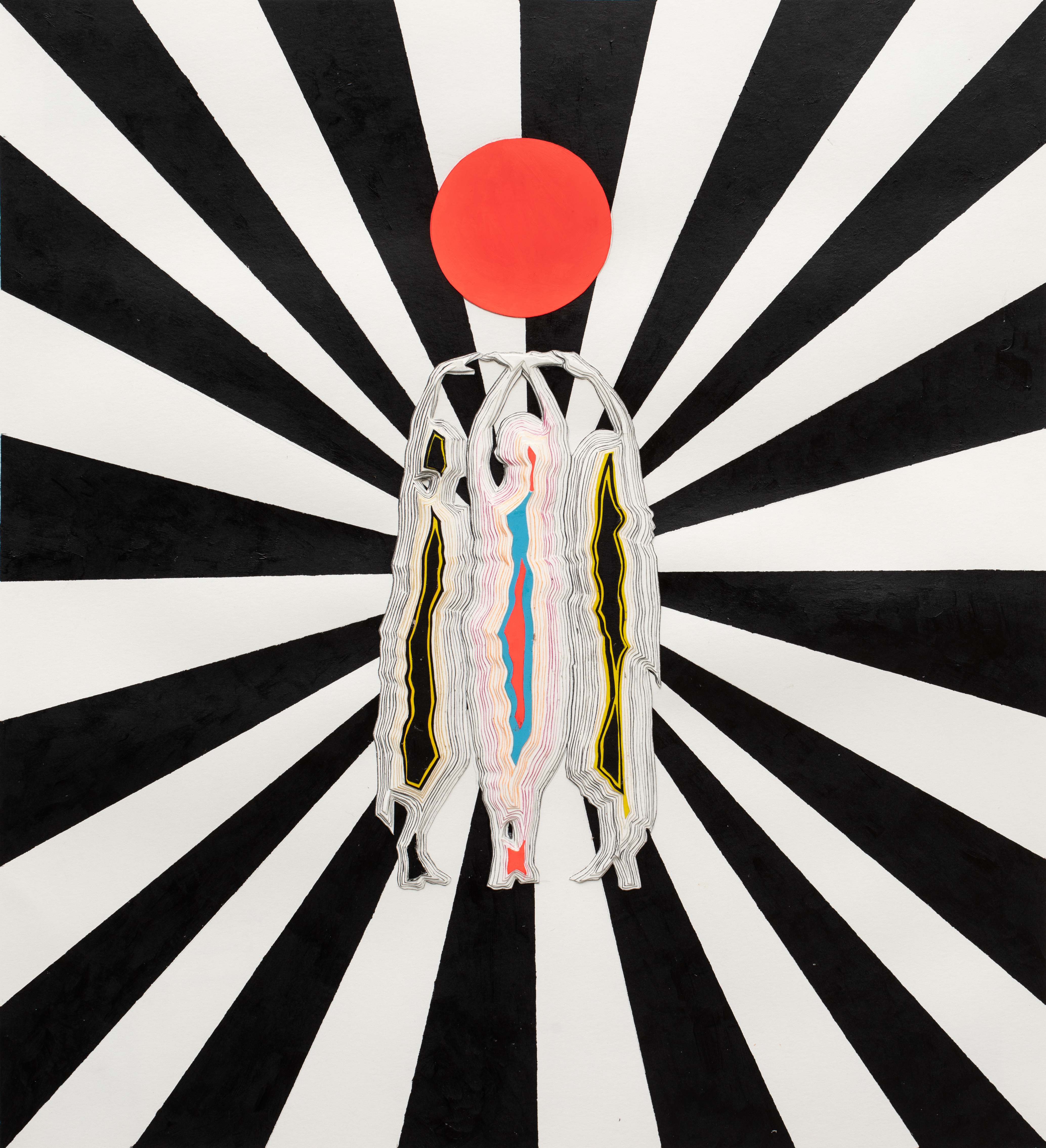 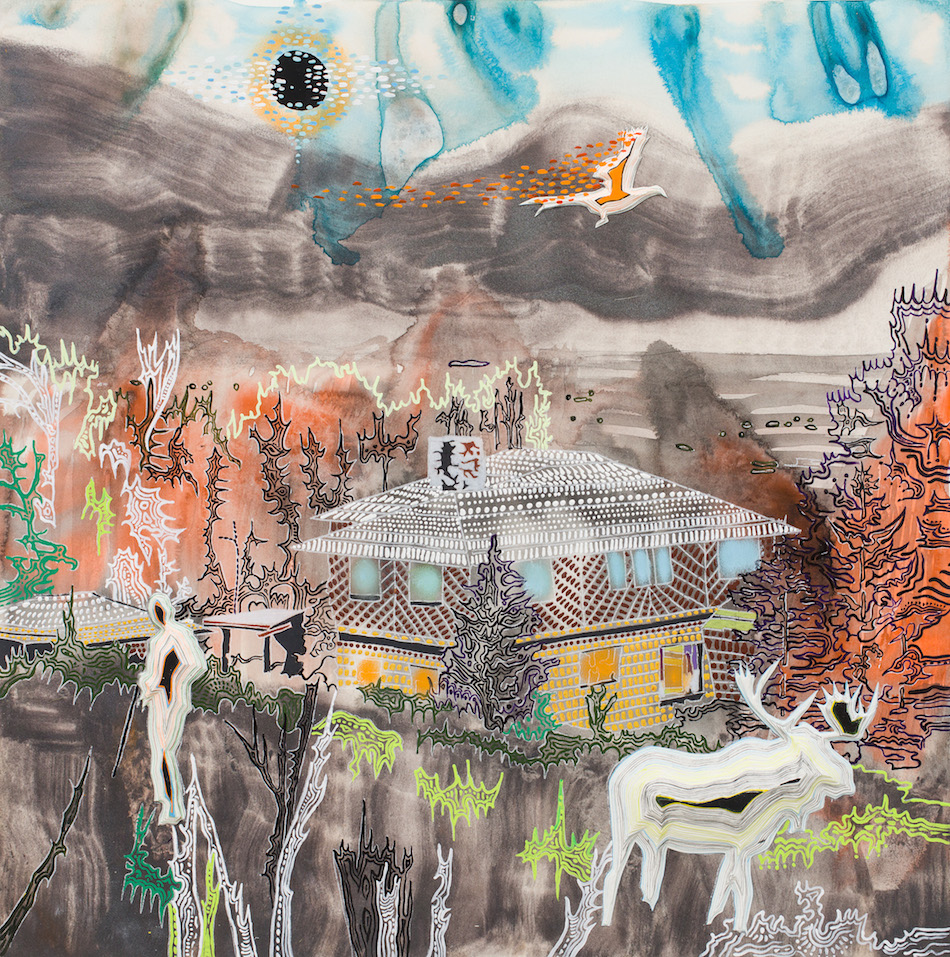 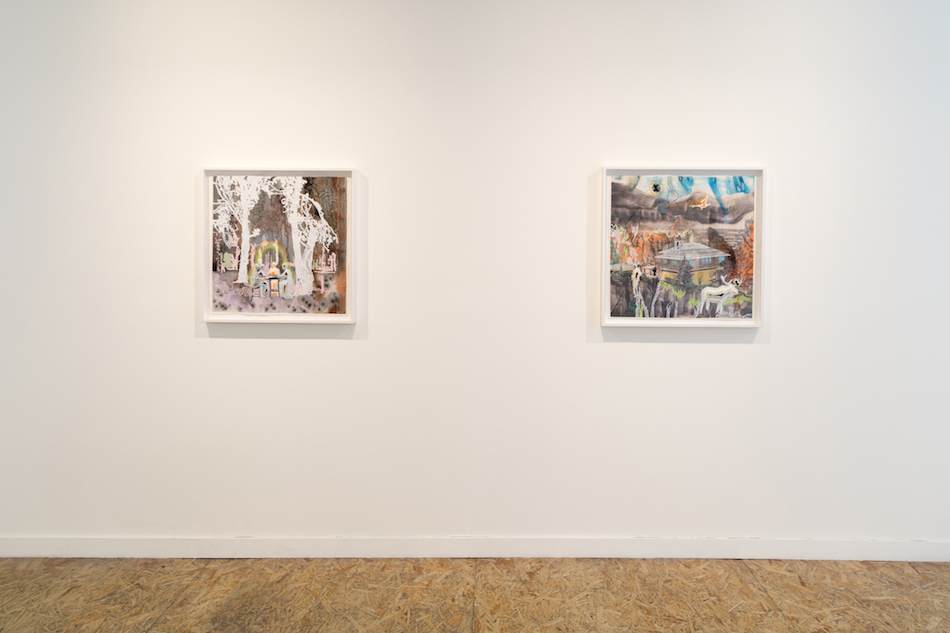 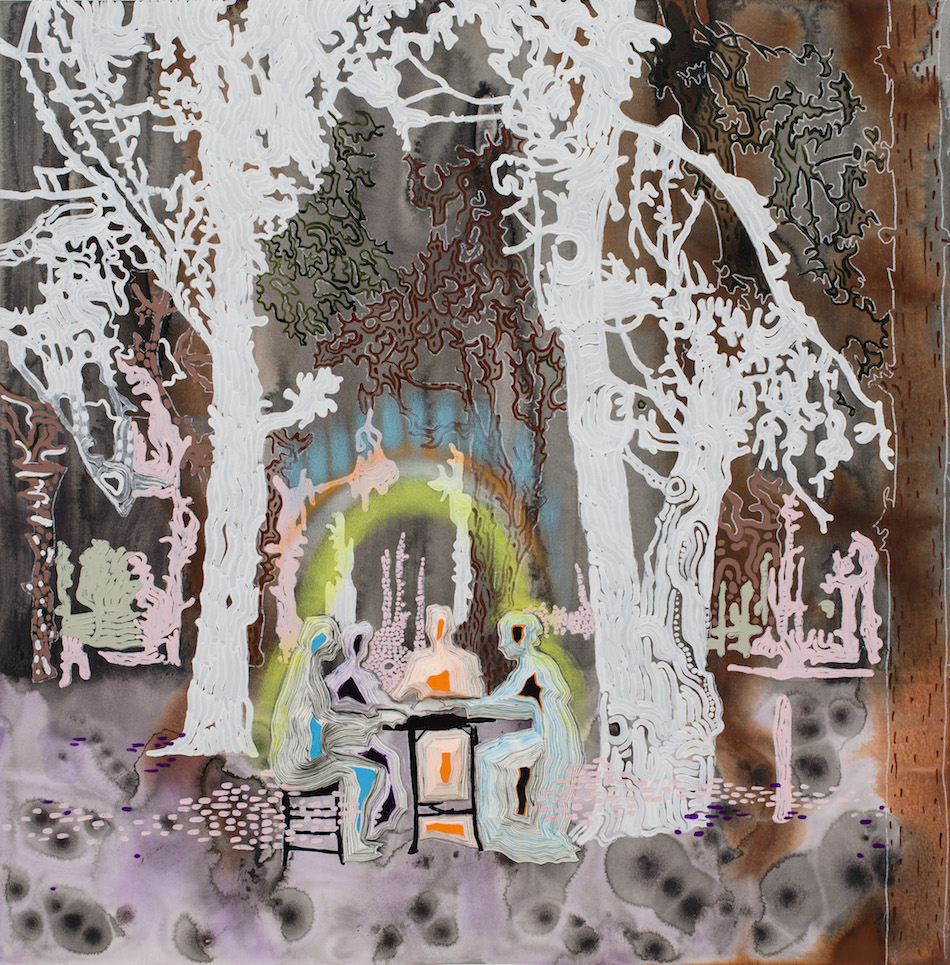 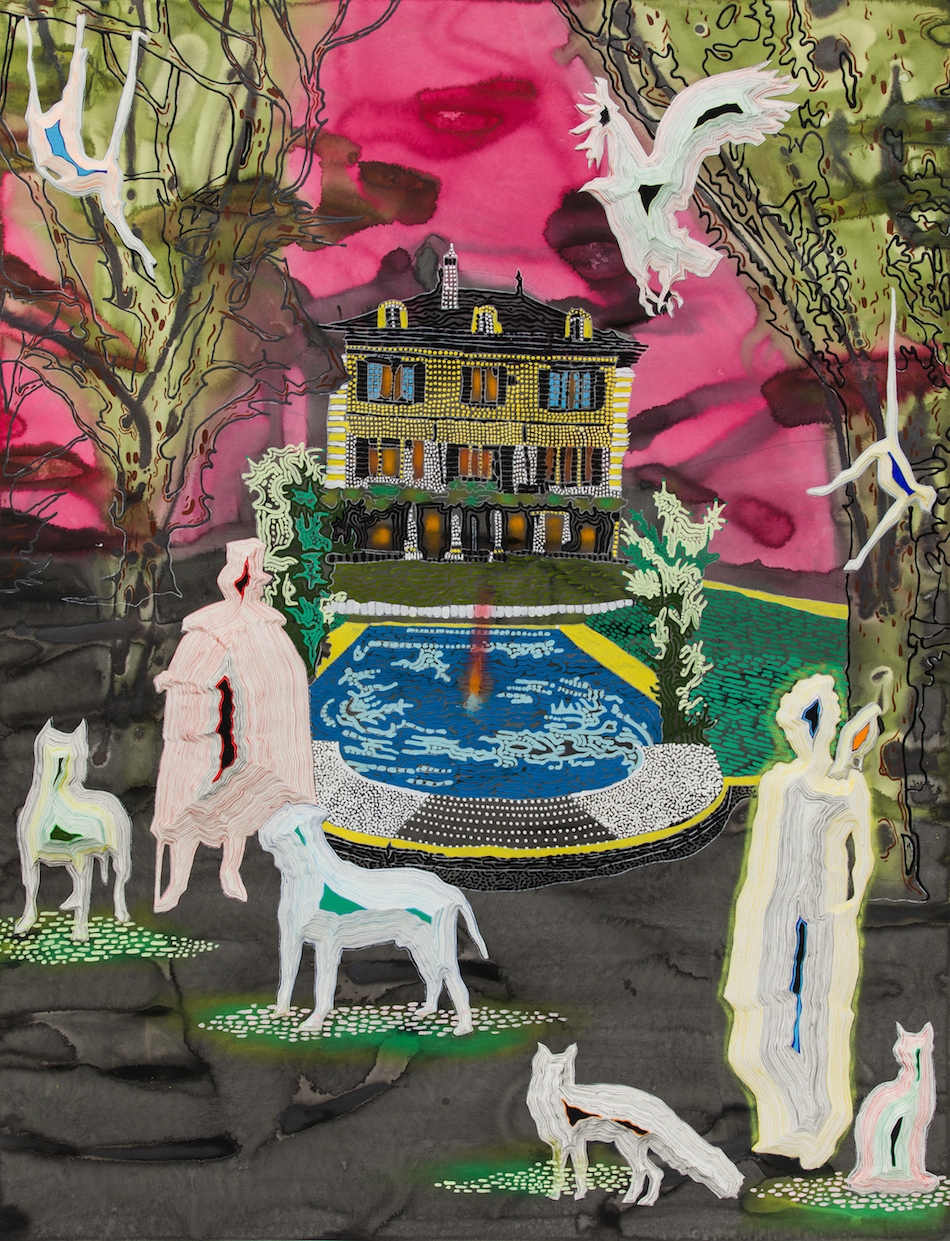 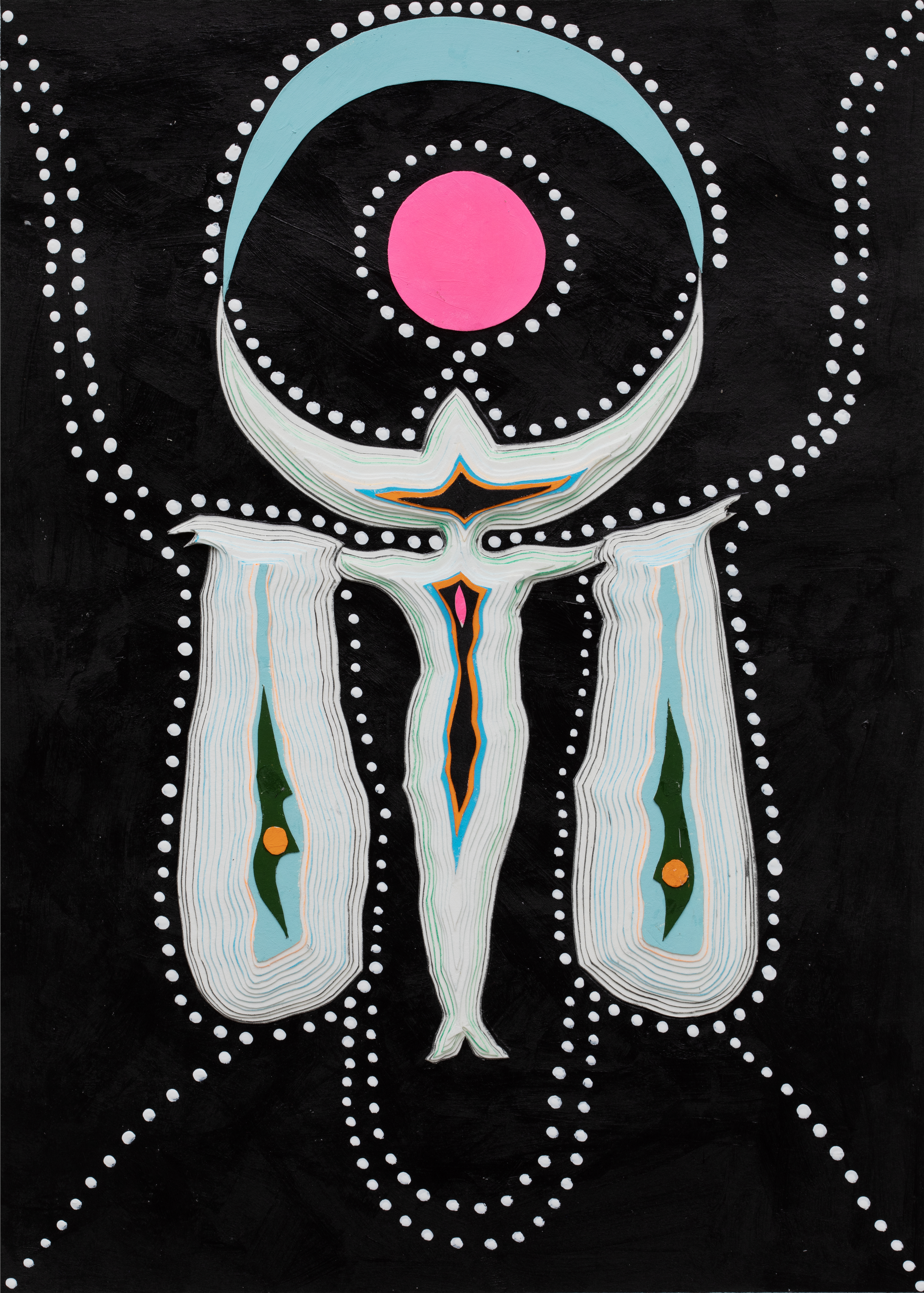 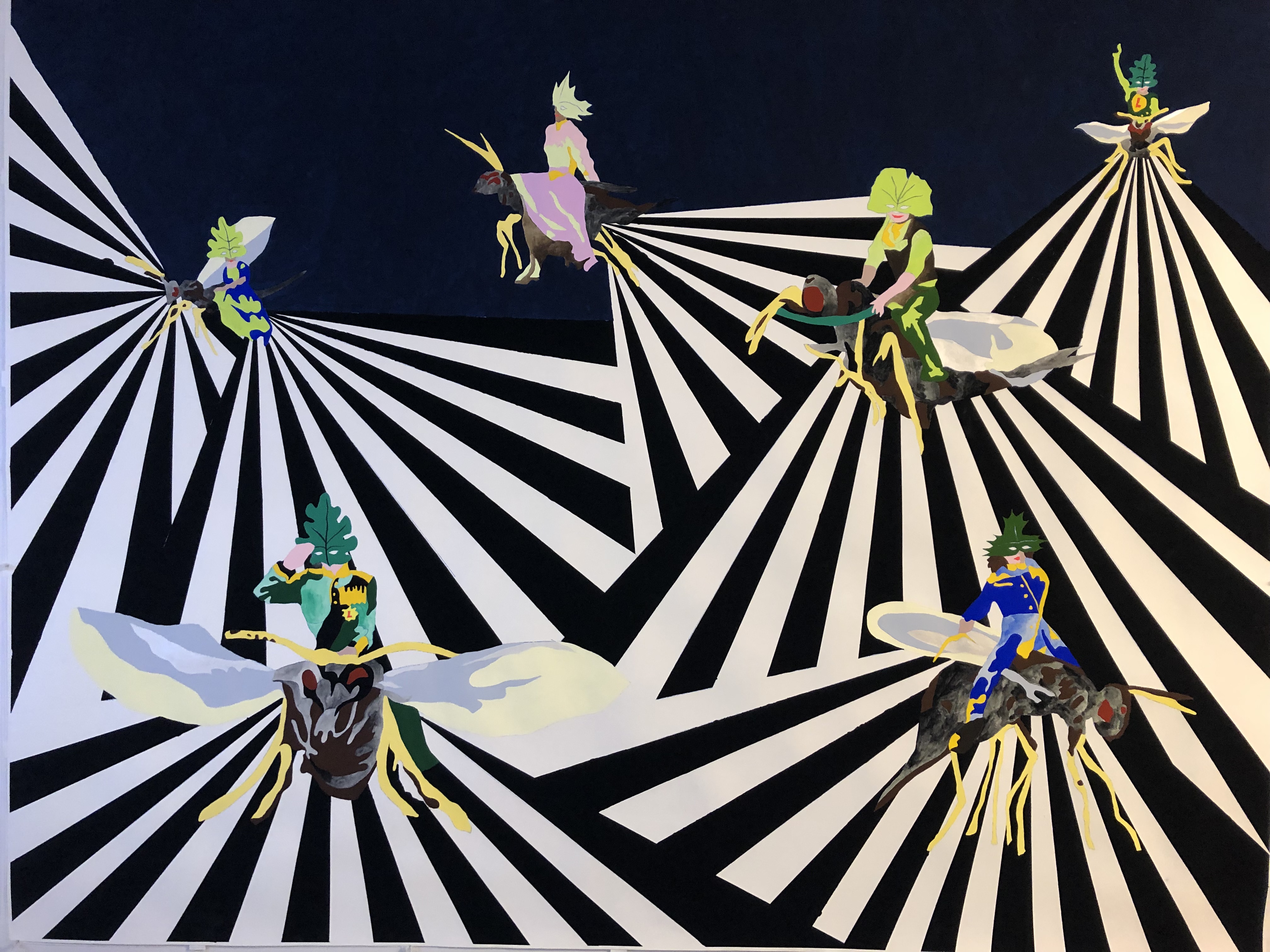 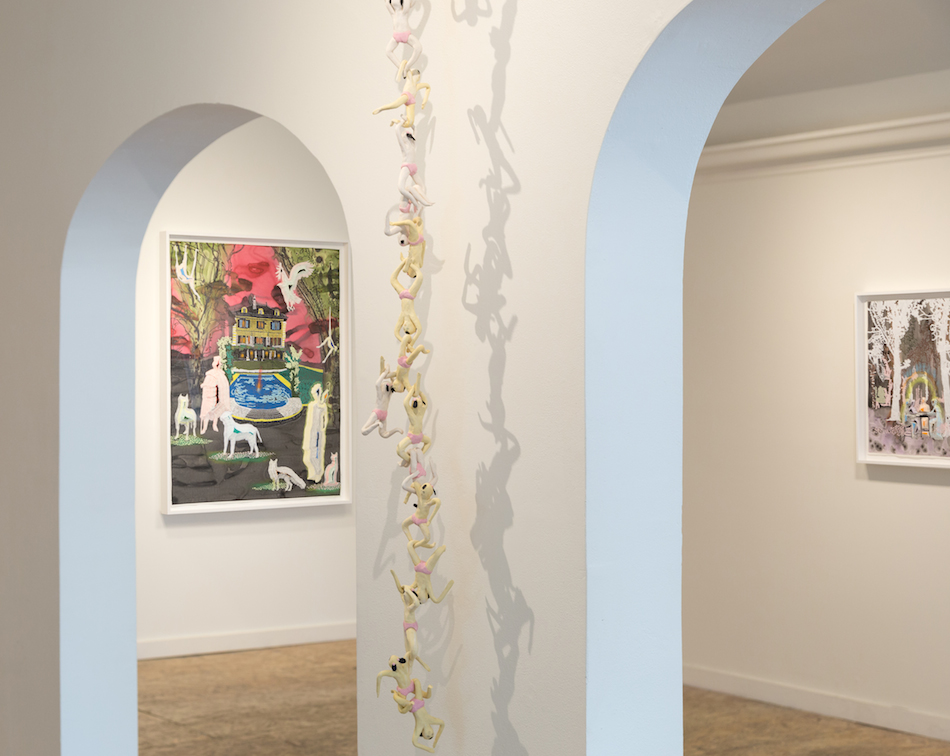 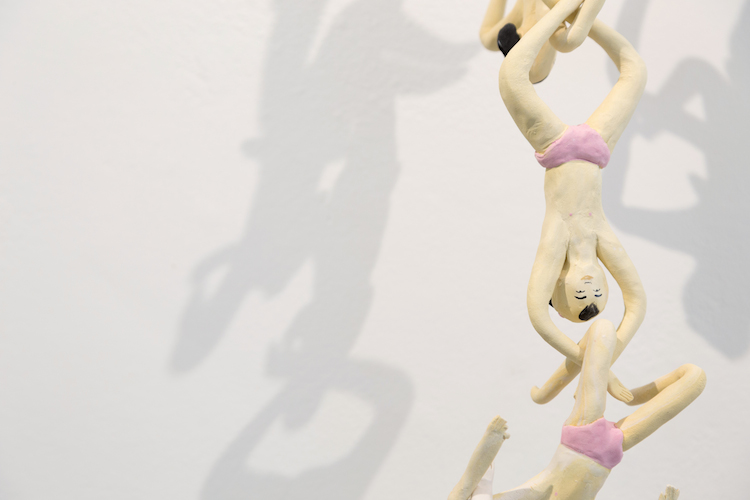 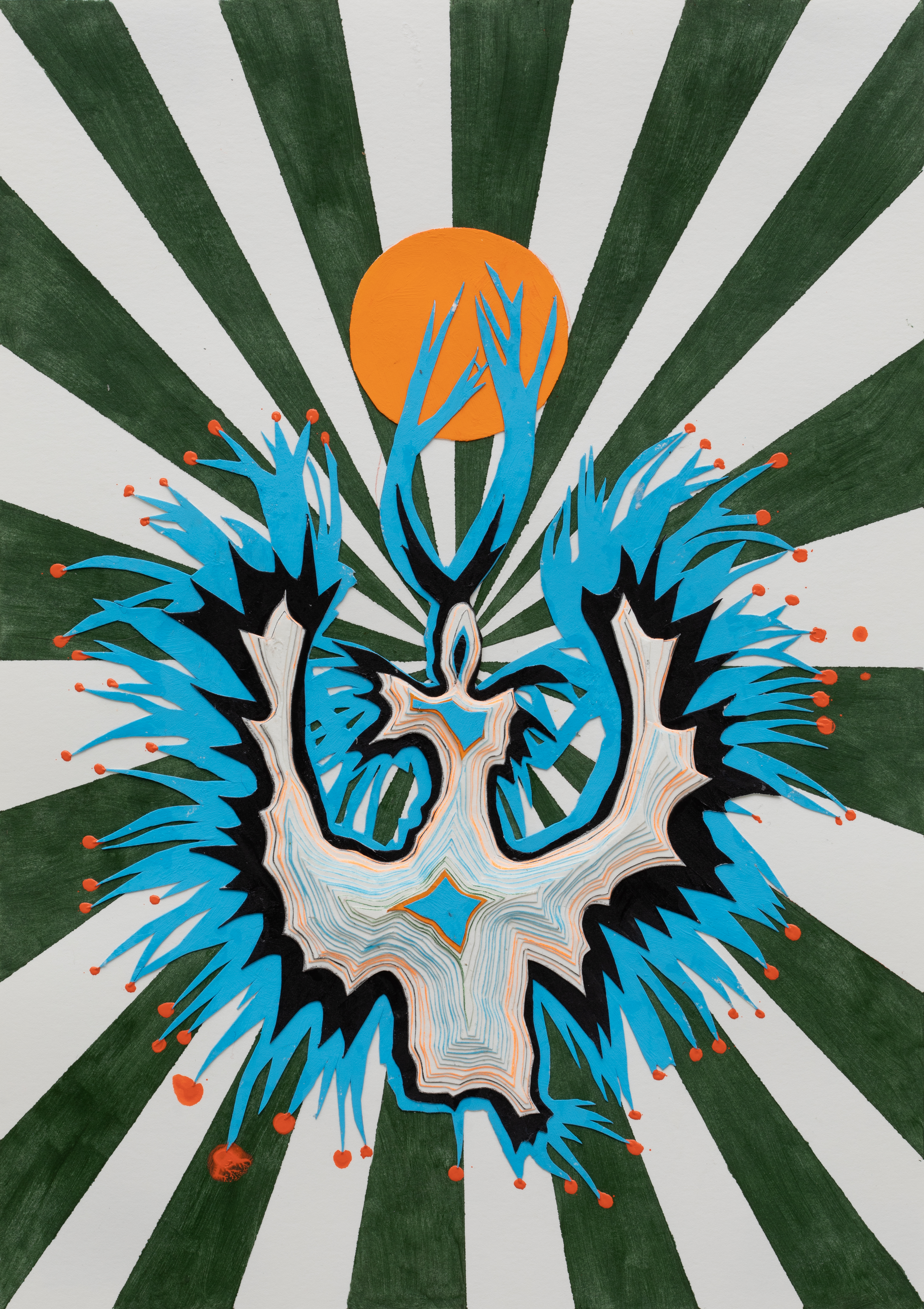 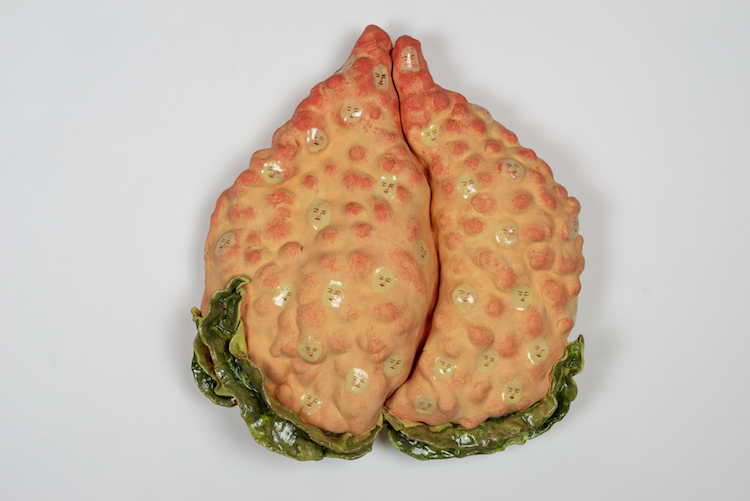 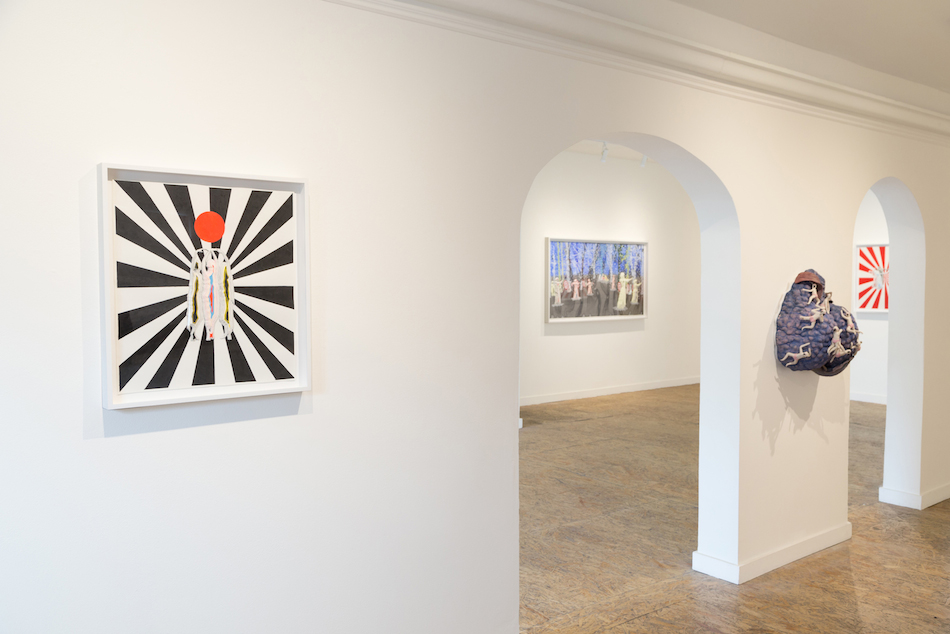 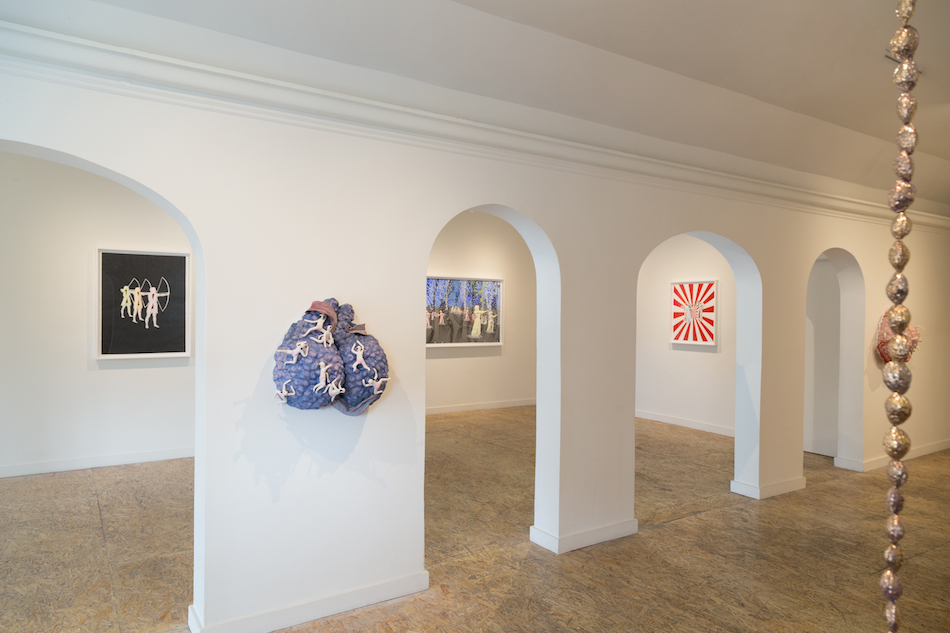 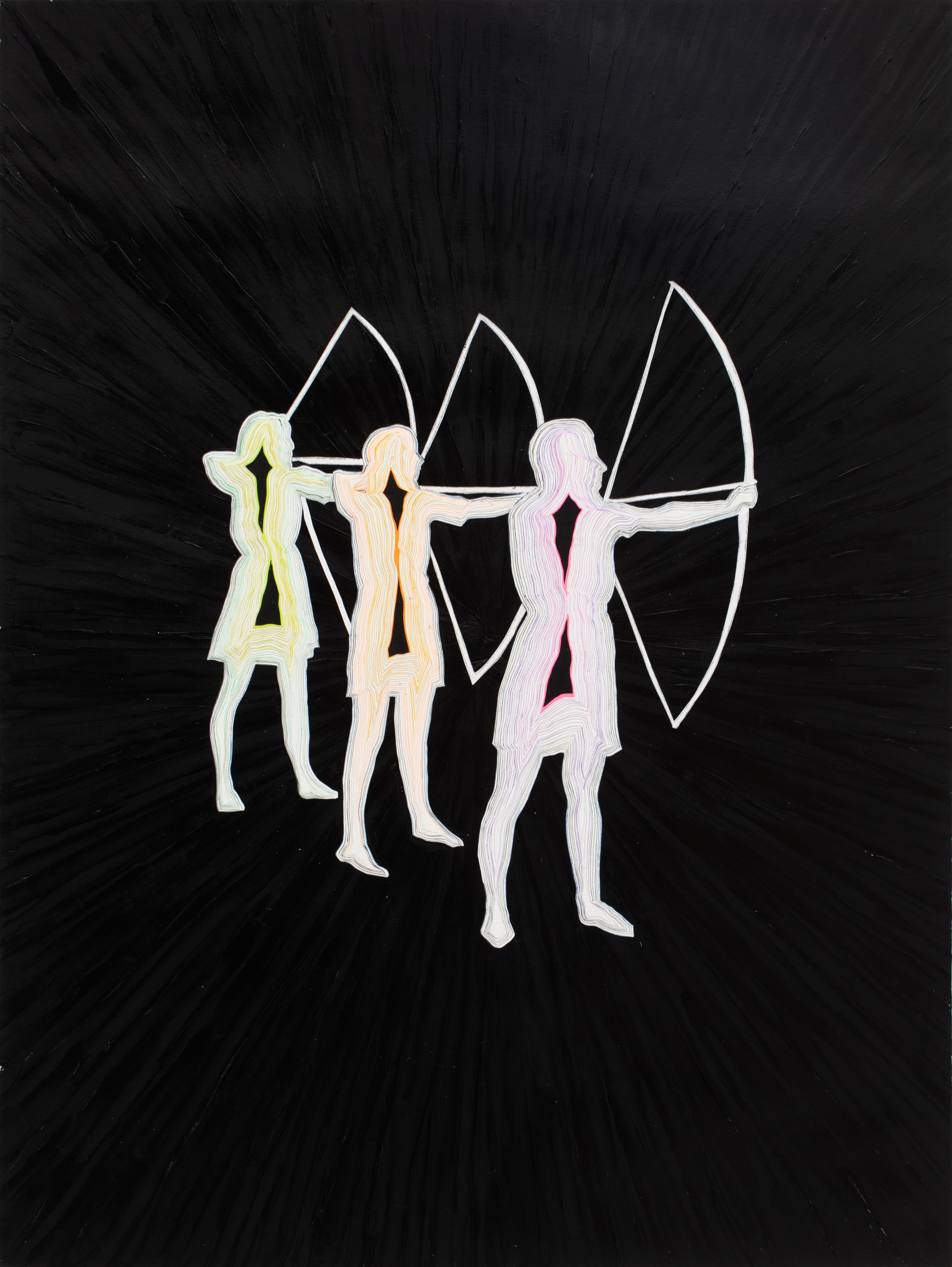 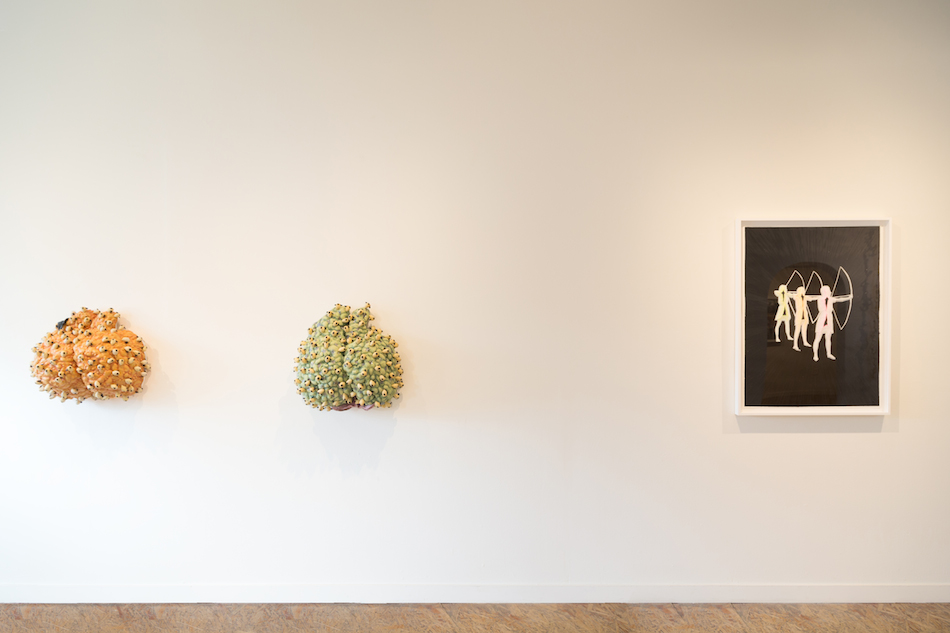 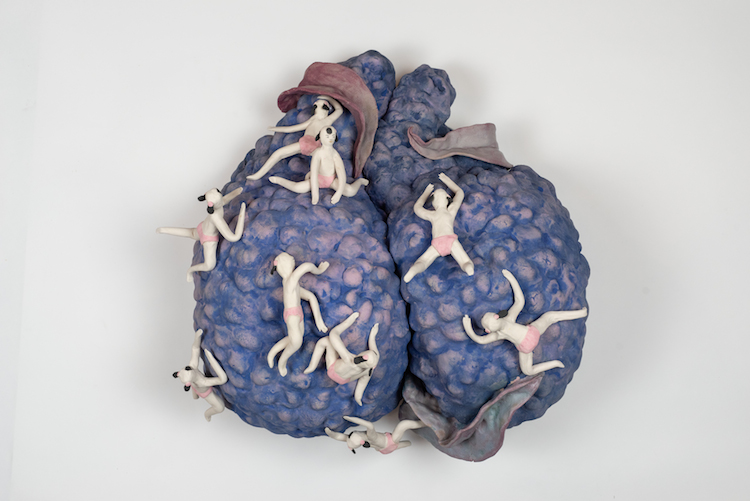 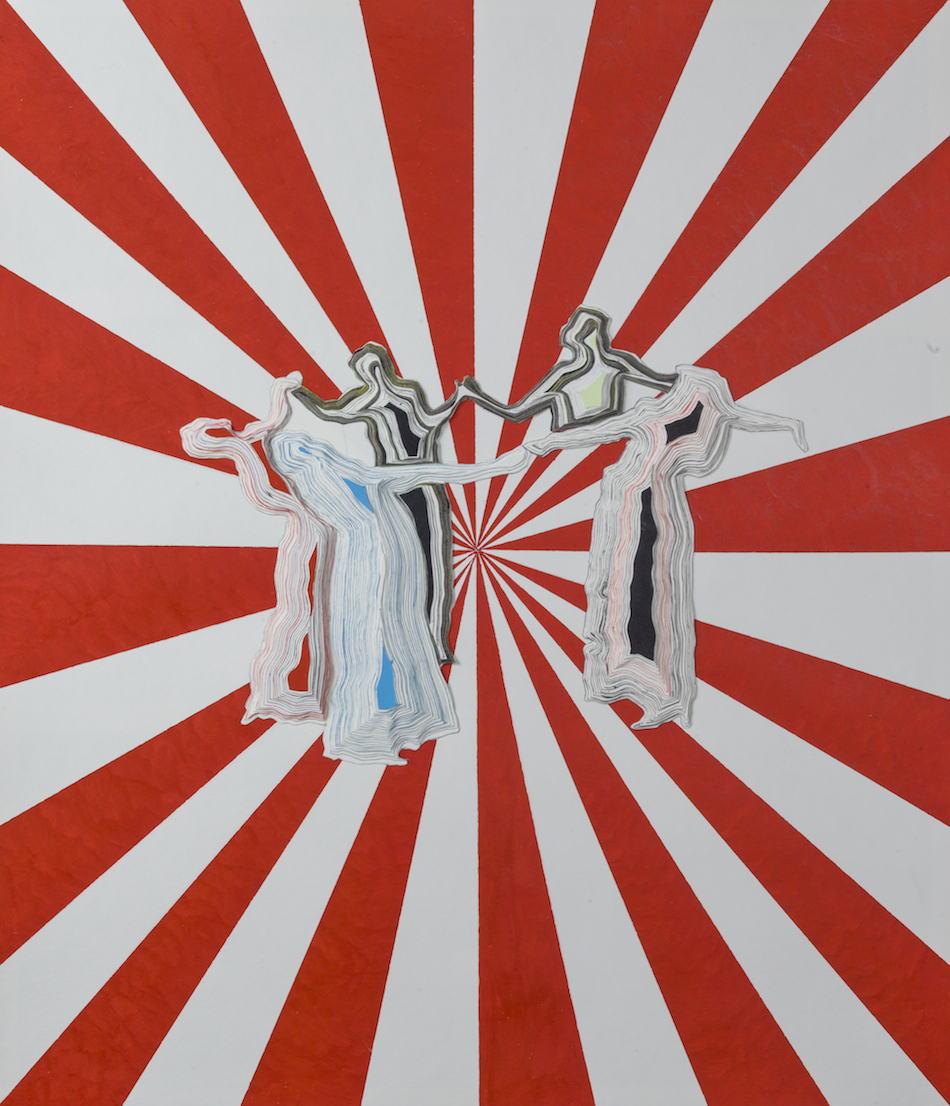 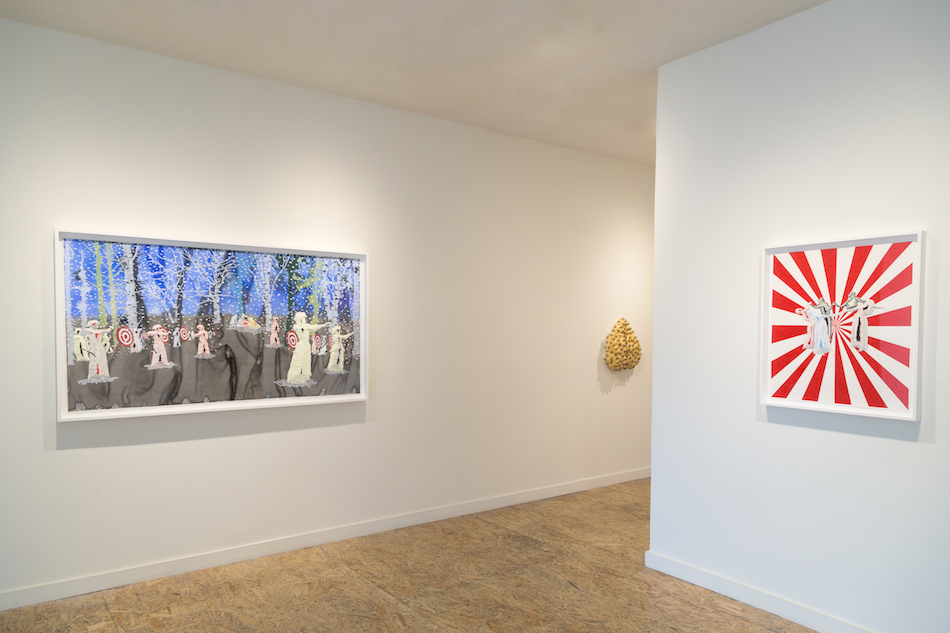 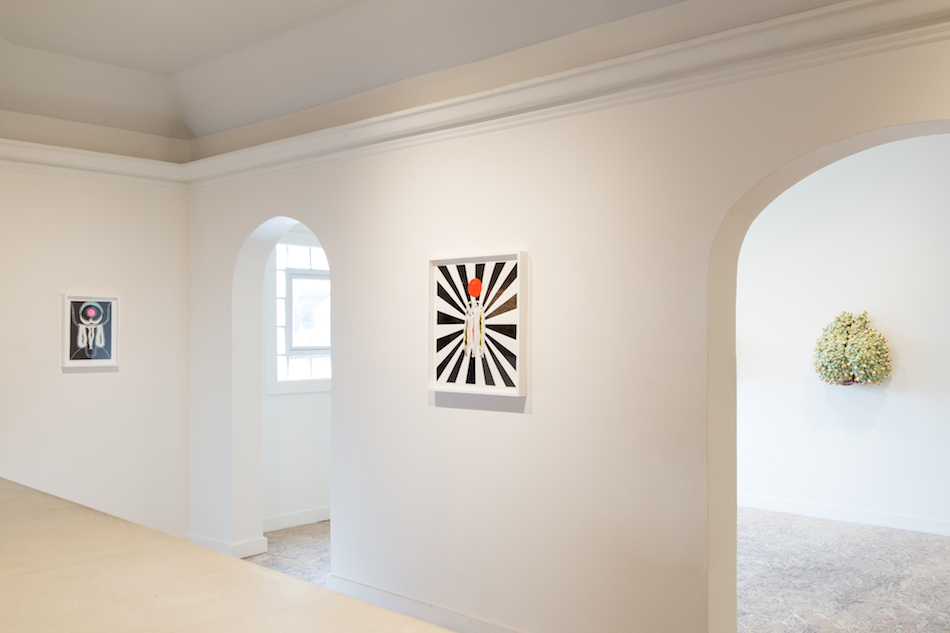 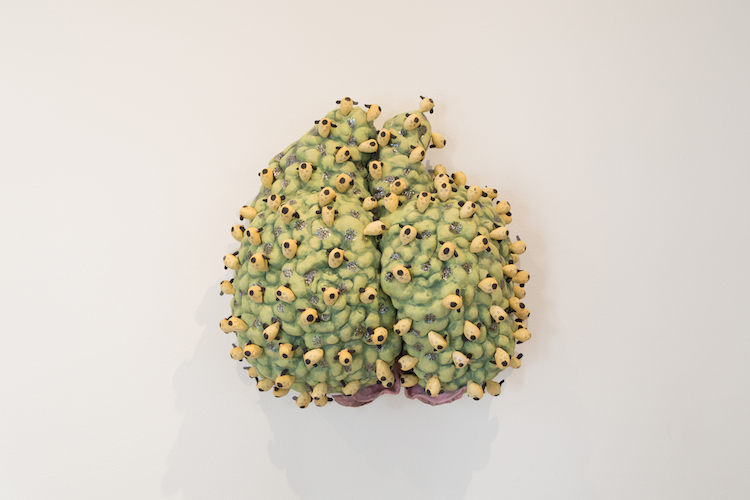 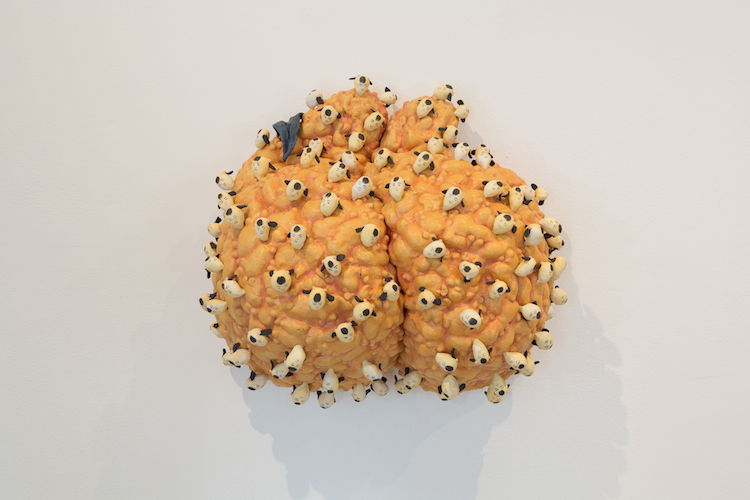 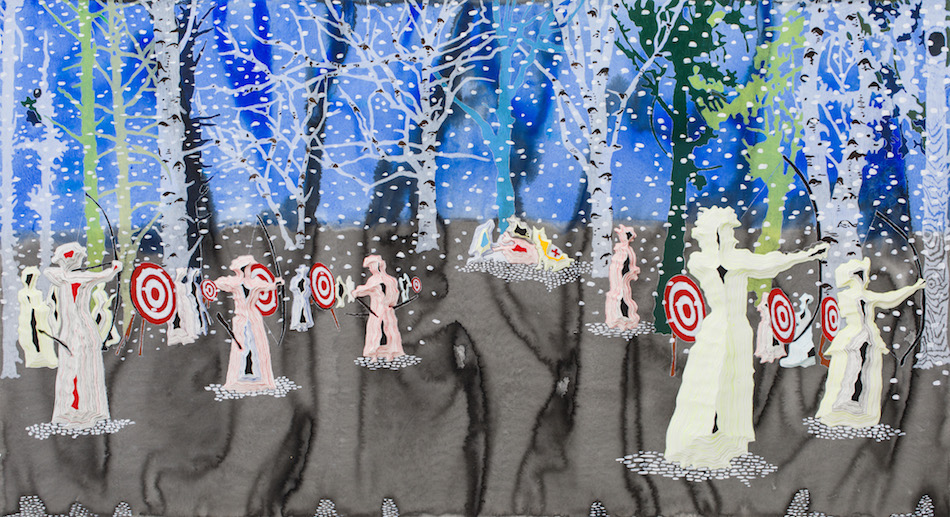 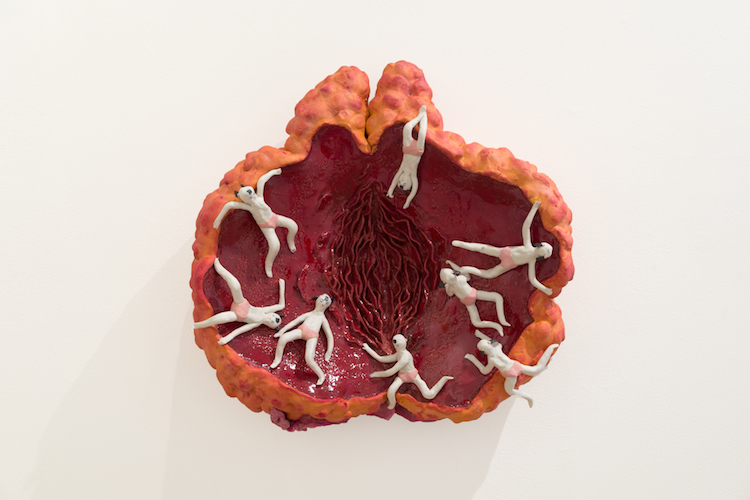 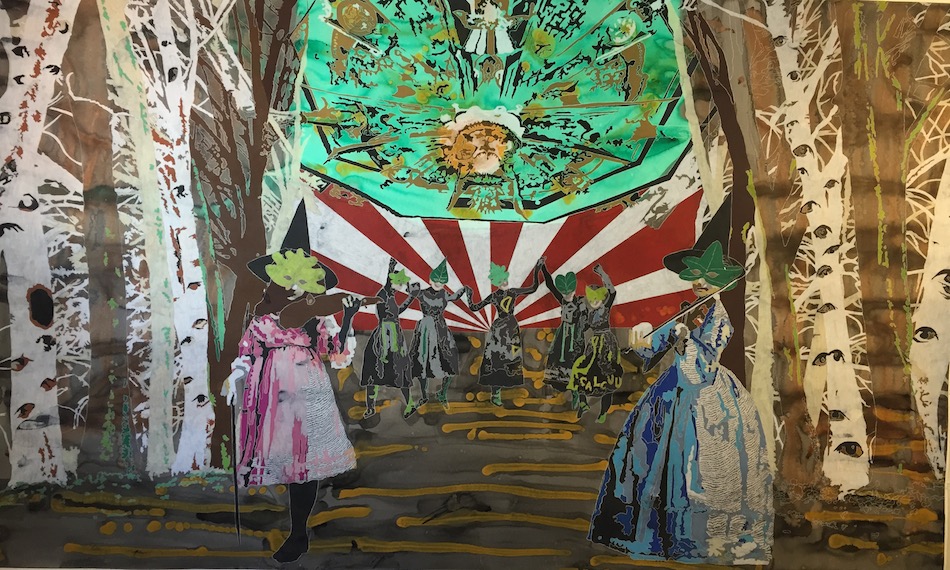