Johansson Projects presents In the Flesh, a solo exhibition of works by Andrew Catanese. Amidst stars twinkling in the night sky, a figure with the torso of a human and the head of a frog stands deep in thought, contemplating the blending of the natural world and the canvas. Holding a paintbrush, the anthropomorphized frog reveals itself to be the artist in the piece titled Portrait of the Artist as a Frog. It is fitting for the artist to consider themself in this form, as the body of work that makes up Andrew Catanese’s first solo exhibition with Johansson Projects ponders the barriers of the human and animal world, as well as those of the pastoral and sublime, and of day and night. The exhibition, In the Flesh, opens January 6 and runs through February 25, and comprises new paintings, sculptures and an editioned zine.

In new paintings and sculptures, Catanese portrays their admiration and respect for the complex systems of life within the natural world. With densely layered acrylics applied in vivid colors with thick, gestural brushstrokes; Catanese depicts the vast world that exists in counterpoint to the recognizable order and structure of society. Quail, deer, coyotes, and other animals function in harmony with their surroundings so much so that they blend into one another, at times inseparable and indistinguishable from their surroundings.

Hybrid forms and anthropomorphized animals appear across the exhibition. In a zine created for the exhibition titled Just Like The Other Boys, Catanese details their journey as an artist searching for their identity in a societal landscape of restricted gender. By drafting hybrid forms, Catanese found comfort and fluidity that opposed masculine ideals. As they write in Just Like the Other Boys: Understanding the body as a site of perpetual transformation began the process of repairing my relationship to my own queerness and to my body.

The barriers between nature and society are often seen as rigid; an impassable divide between two binaries. The nighttime, when our perception is lowered and senses less attuned only heightens this difference. Yet through In the Flesh, it becomes evident that this divide is self-imposed. In the painting Words That Reach, a number of deer seem to dance in the night, entangled among a forest of trees whose roots sprout humanlike hands. Looking into this otherworldly scene, one where comfort and connection are valued, the swaying bodies and the rooted hands beckon to enter this world from a place not of order, but of respect.

Interview: “Finding Inspiration on the Run” by David Gleisner for janji.com | June 2022
“Andrew’s work embodies his curiosity about the encounters that bring us closer to our natural origins. As an ultra mountain runner and Janji Field Team member, he indulges this curiosity with trail runs around his California home that connect him with members of his natural community, from snakes to black tail deer. We chatted with Andrew to learn more about his art, his running, and the myriad ways that they inform each other.” LINK

Andrew Catanese (b. 1993 Ann Arbor, MI) is a painter and sculptor from the American South. They earned a BFA in Studio Art at the Sam Fox School of Art at Washington University in St. Louis. After receiving their BFA, Catanese worked as an artist in Atlanta, GA. They are currently working towards their MFA at Stanford University. Catanese has shown their work in galleries and museums throughout the United States, including Johansson Projects (Oakland, CA), Maune Contemporary (Atlanta, GA), Macon Arts Alliance (Macon, GA), Banana Factory Arts Center (Bethlehem, PA), SOMArts (San Francisco, CA), and Gertrude Herbert Institute of Art (Augusta, GA). Artist residencies include The Creatives Project, Artist in Studio Residency in Atlanta, GA, among several public art projects for murals and public sculpture. In 2021, they were awarded the prestigious Cadogan Scholarship that supports master of fine arts students. Catanese currently lives and works in Palo Alto, CA.

Andrew Catanese’s work searches for new ways to understand ourselves and our relationship with the “natural” world. In their paintings, Catanese melds aspects of the human with animals, foliage, and other organic forms. The body becomes an ever-changing site of transformation, a bridge between realms. Catanese blurs the great divides defined by Bruno Latour; human and animal, nature and culture, organic and technological; in favor of understanding these things as deeply intertwined. By subverting dualism, Catanese’s work finds ways to talk about new constructions of the self. The work insists on a fluid and transformative understanding of our bodies; the work knows the human body to be a cyborg constructed from animal, plant, nature, and technology. 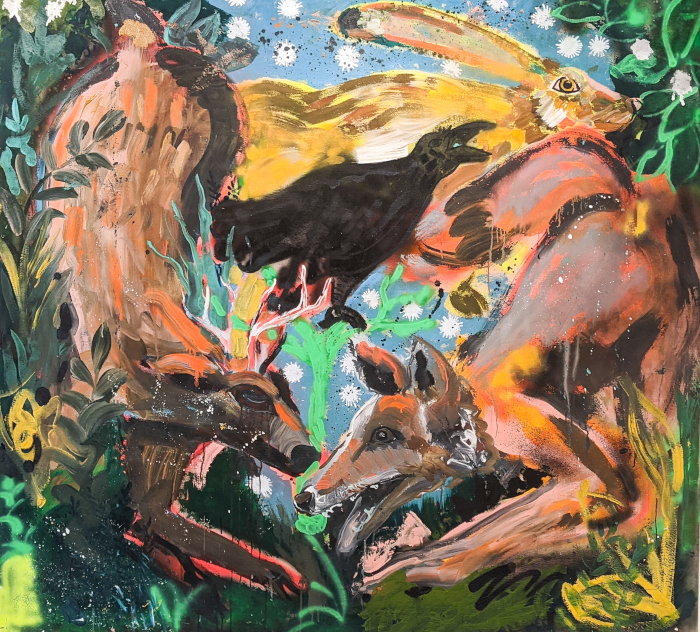 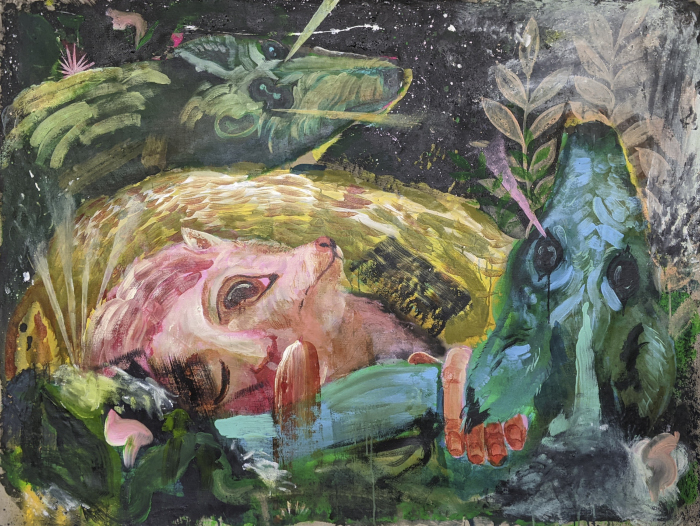 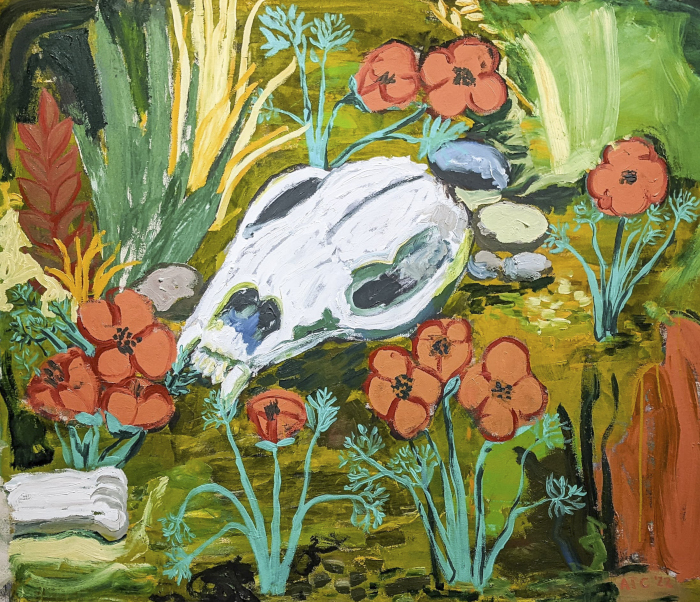 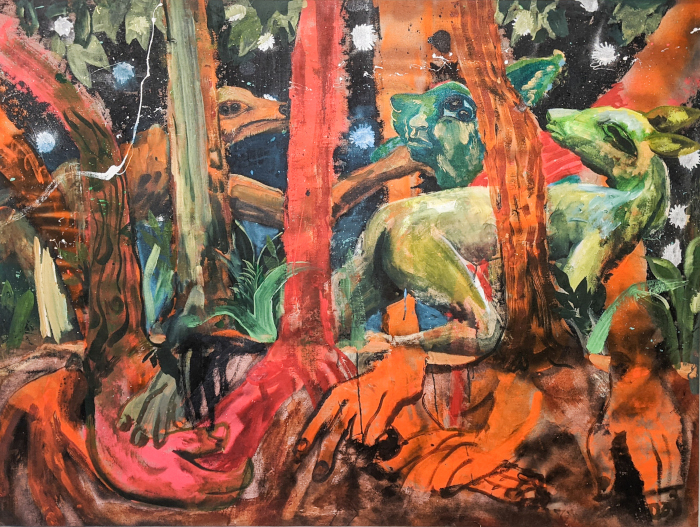 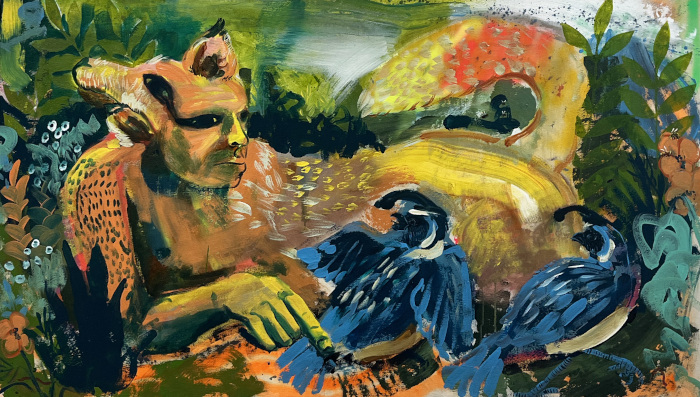 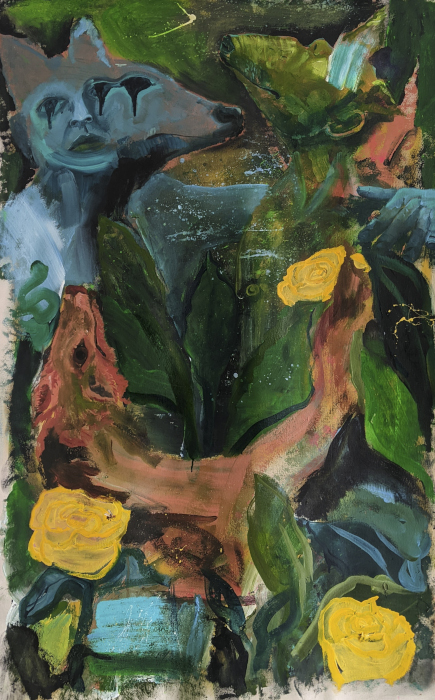 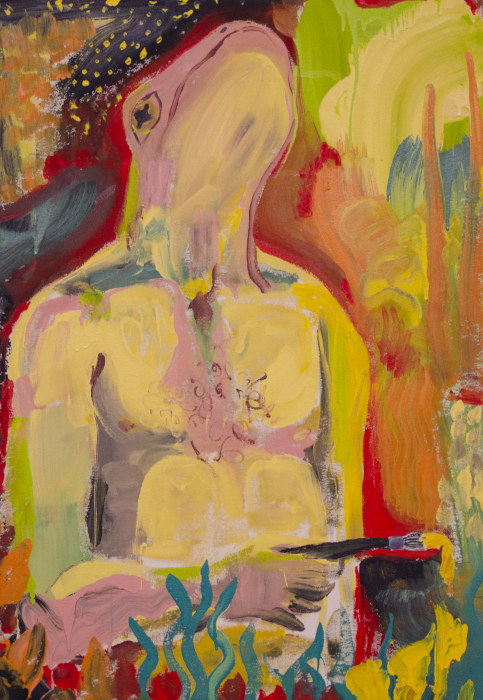 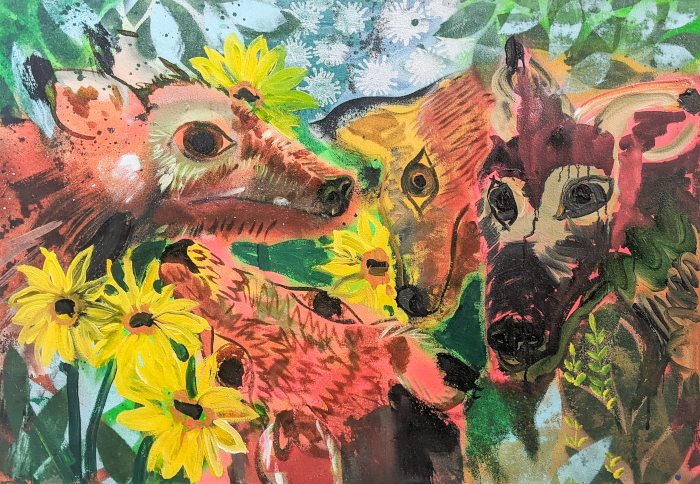 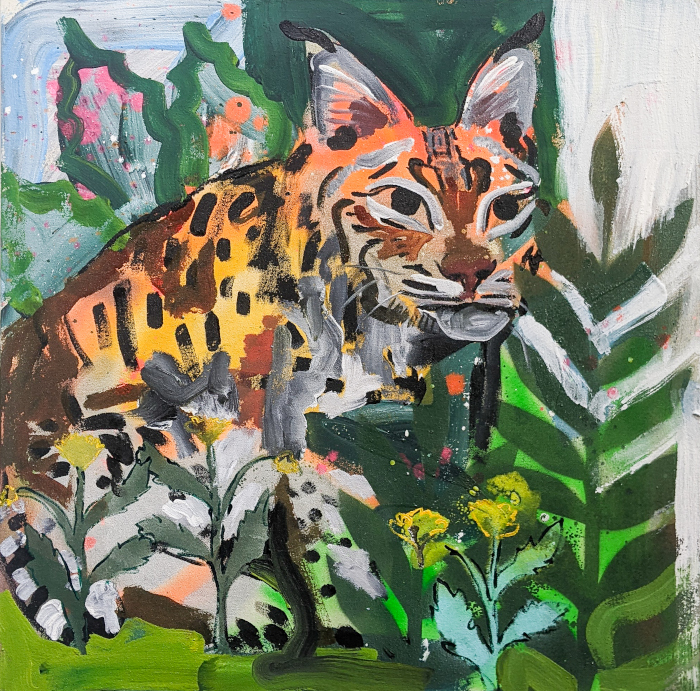 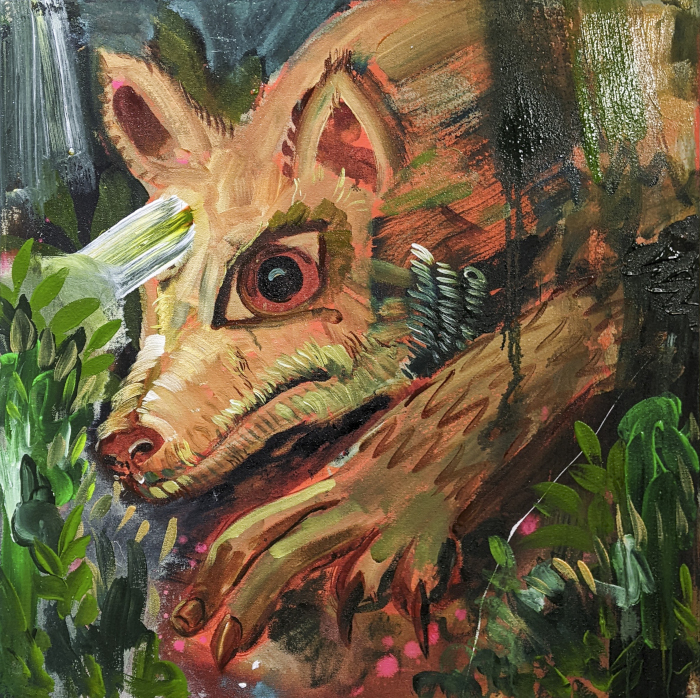 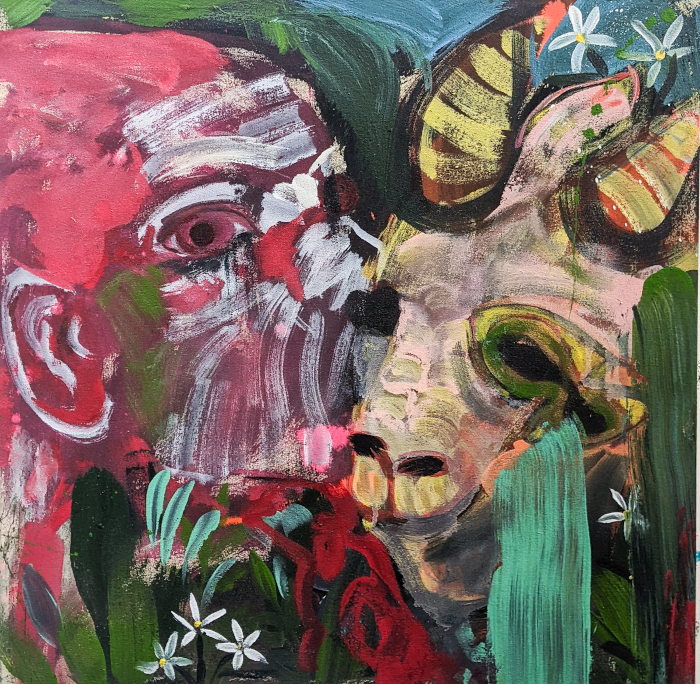 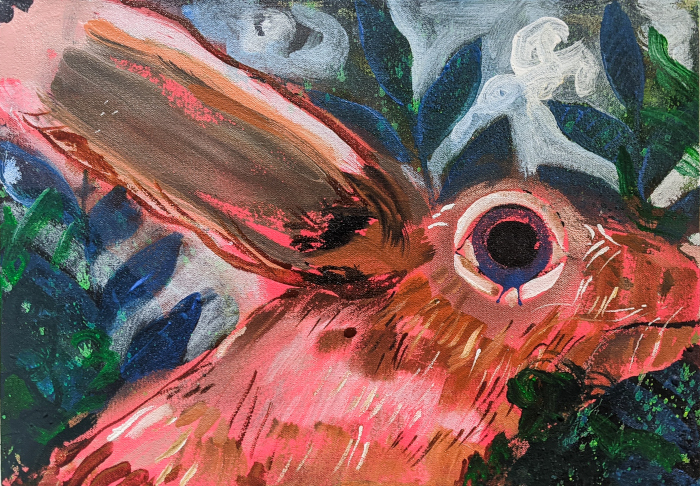 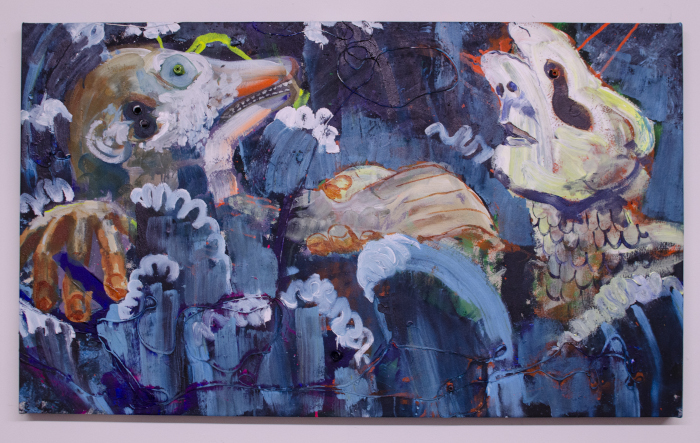 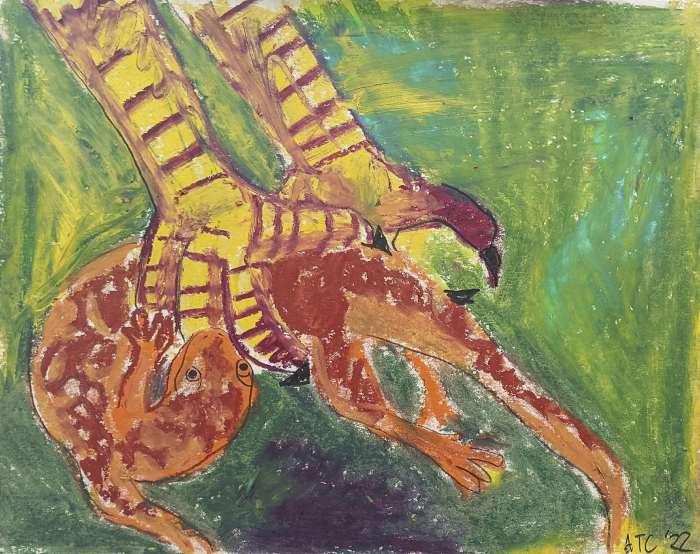 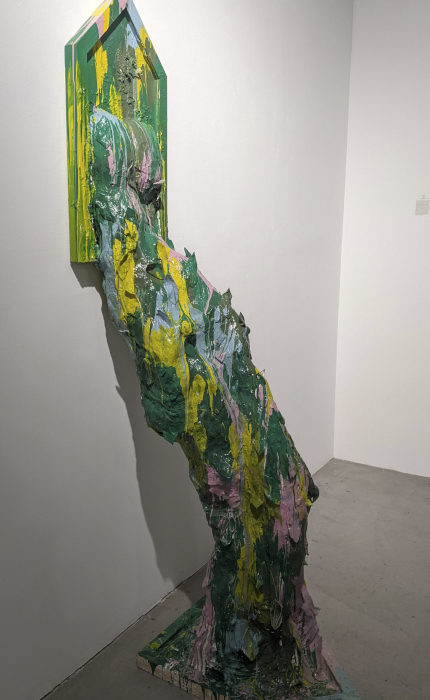 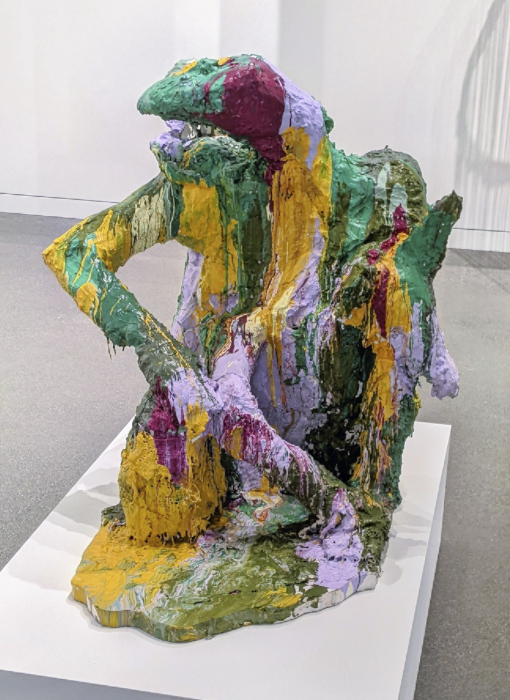 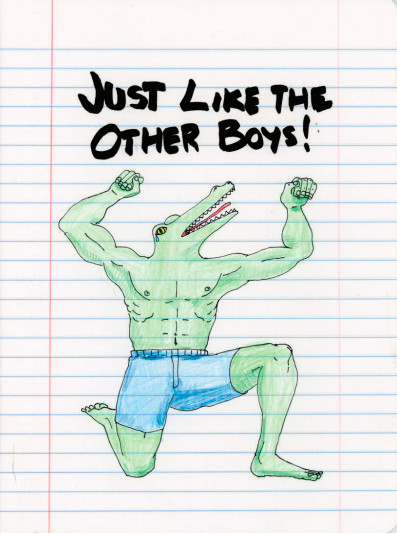