Sheena Rose is a visual artist who works in Bridgetown, Barbados. Her multi-disciplinary practice includes painting, drawing, performance, new media, public art, and mixed media. This latest body of work explores accessibility of wealth and personal power, referencing symbols of affluence and place. Her painting style is characterized by flat coloring, bold patterns from the seventies and eighties, and vivid, comic-book-like palettes and vignettes. Her proud figures take up literal and figurative space, donning clothes, hair and confidence that commands attention. Situated in a myriad of contexts – the tropics, with horses, beautiful interiors – they are symbolic celebrations of the artist’s imagination. Rose is curious about a generous world, where she can move freely and be present as her whole self in any space. Using only paints that are locally accessible to her in Barbados, she unlocks a certain freedom while querying real life strategies on how to get there.

Sheena Rose (b. 1985, Bridgetown, Barbados) has exhibited in the United States at the Weatherspoon Art Museum, Greensboro, North Carolina; De Buck Gallery, Miami; Connect Gallery, Chicago, and Johansson Projects in Oakland, among others, and across the globe including the Havana Biennial, Cuba; ICF, Royal Academy of Arts, London, England; Berlin Biennale, Berlin, Germany; and the University of the West Indies, Barbados.

Her work has been featured in publications including The New York Times, Travel & Leisure Magazine, Vogue, Hospitality Design, White Wall, Wetranfer, Black Futures, Fox Television Empire Season 6. Her art appeared on the cover of “The Star Side of Bird Hill” written by Naomi Jackson.

Public works include a two-story mural at the Inter-American Development Bank Headquarters in Washington DC and a mural for the exhibition “The Other Side of Now” at the Perez Art Museum Miami. She was also commissioned by the DSM Public Art Foundation to design seven bus shelters in the 6th Avenue Corridor, Iowa.

In 2020, Rose won the Greensboro School of Art Distinguished Alumni award. In 2014, she earned the distinguished Fulbright Scholarship. She holds an MFA in Studio Art from the University of North Carolina at Greensboro.

hospitalitydesign.com “Sheena Rose: A Visual and Performance Artist Channels Her Challenges Into Creation” January 31, 2021 by Alia Akaam
“Even before the pandemic reached North America, 2020 was off to a dispiriting start for Sheena Rose. After several years of baffling health struggles, the Barbadian contemporary artist was diagnosed with lupus; just a week later she was held at gunpoint. Then, the world began to shut down.” Link

Weatherspoon Art Museum “A Conversation with Sheena Rose” 2021 by Dr. Emily Stamey, Curator of Exhibitions
“Since June, the Weatherspoon’s atrium has been enlivened with a dynamic new artwork by artist Sheena Rose, MFA ‘16. Filling an entire wall of this gathering space, the brightly colored work greets people as they enter, sits with students as they wait for classes to begin, and provides a lively backdrop for selfies and group photos.” Link

Whitewall.com “Sheena Rose: Dramatically Removing the Landscape” November 16, 2020 by Heike Dempster
“Contemporary artist Sheena Rose was born in 1985 in Bridgetown, Barbados, where she also currently lives and works. A Fulbright Scholar who holds a BFA from Barbados Community College and MFA from the University of North Carolina, Rose’s work is equally rooted in her Caribbean heritage as it is in her efforts to challenge any preconceived notions and definitions of said heritage.” Link

The New York Times “The Artist Sheena Rose is Reaching Beyond Barbados” May 31, 2017 by Tamara Best
“Almost every room in Sheena Rose’s family home, tucked away on a quiet street here, has played host to her paintings and live performance art.” Link 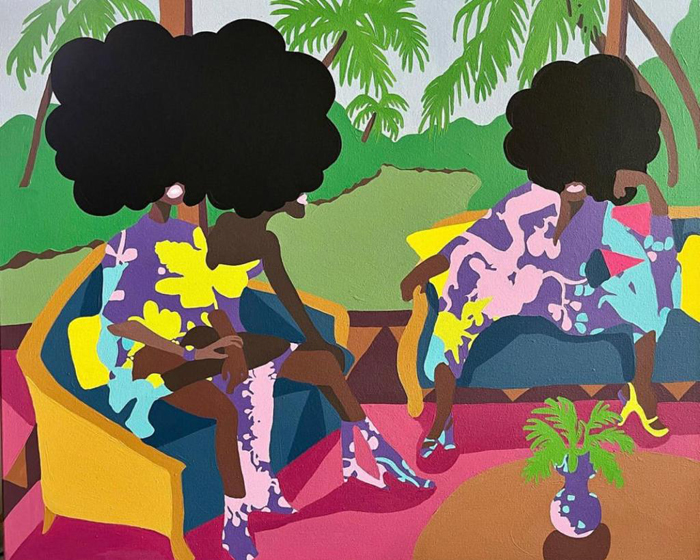 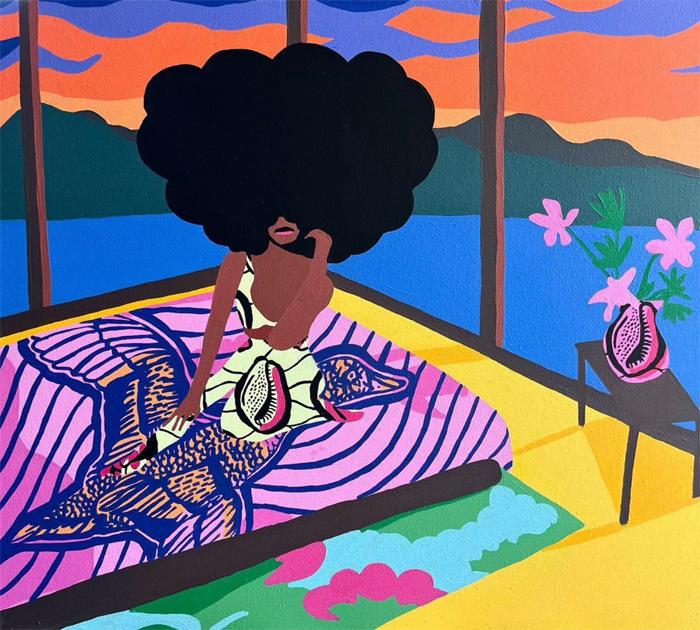 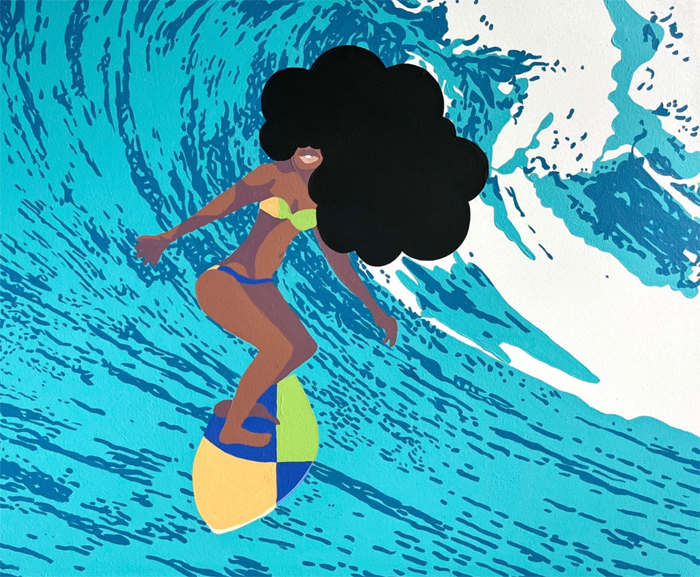 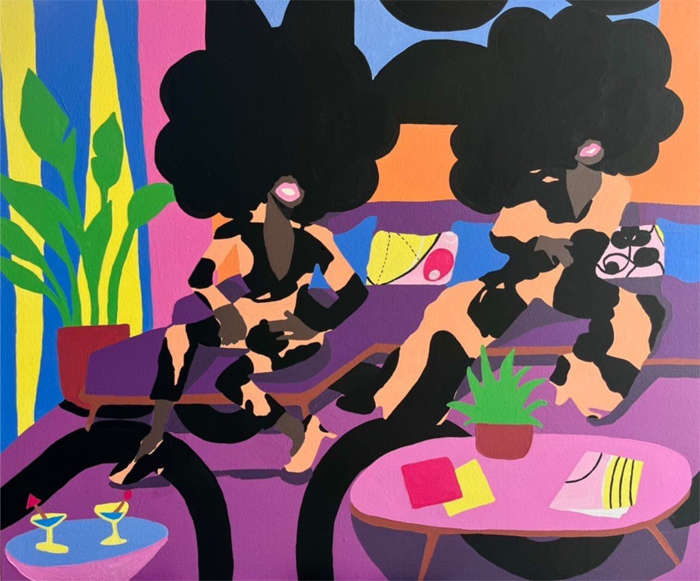 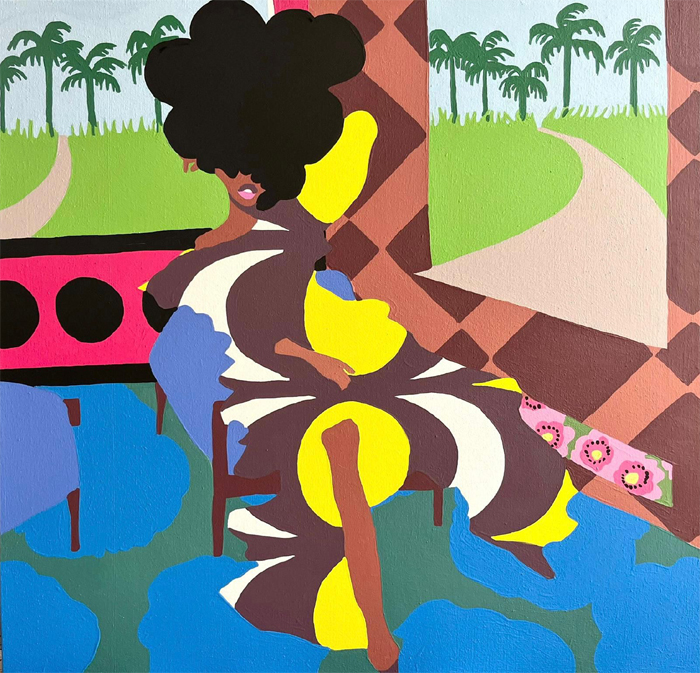 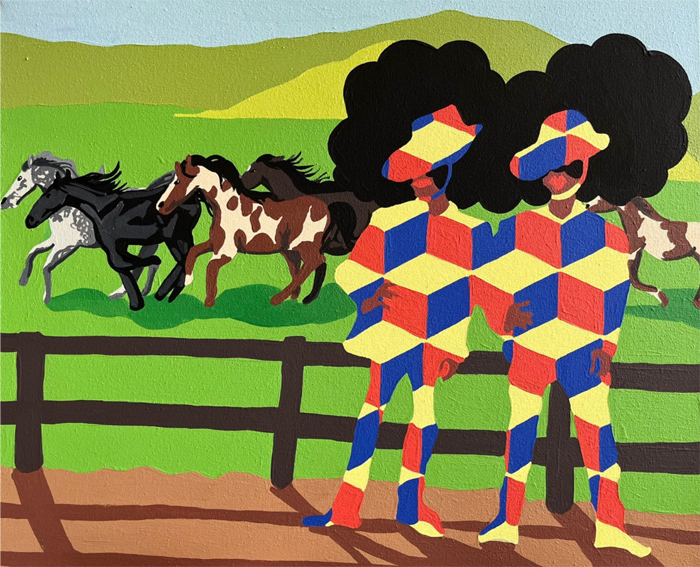 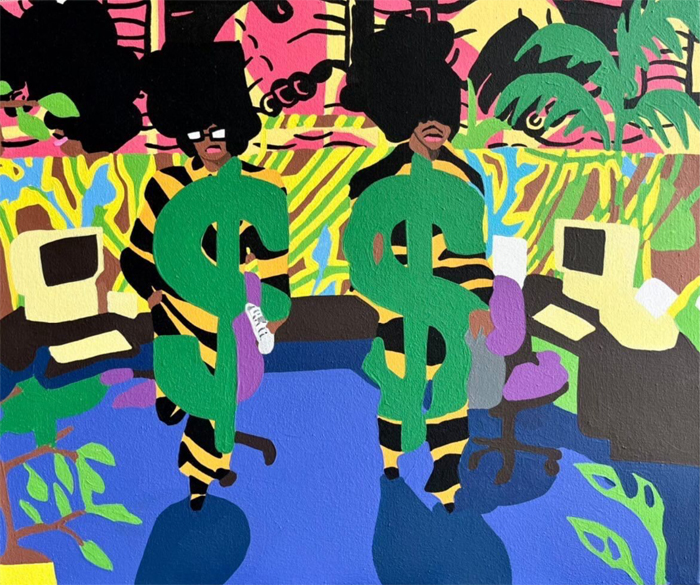