In my artistic practice, I explore the transformation of the Californian landscape through the lens of modern aesthetics using raw materials of environmental relevance. The work is centered conceptually around research and response to the landscape, environment, and history of the Los Angeles region. The bulk of the materials that I utilize are salvaged and repurposed from the area, and speak to hybridized structures and blatant artifice of the city in both its natural and man made environments. This process of research began with an interest in the history of the midwestern suburban landscape and culture from my youth, where the middle class idea of ‘the good life’ fueled a massive overhaul of the American landscape that would drastically alter how we live for generations to come.

My complex relationship of both fascination and antipathy with Los Angeles has lead me to examine philosophies of utopia and idealism that are fundamental to the California Modern movement as it developed in the early-to-mid 20th century. The city’s wild west attitude during its boom, in concert with its architectural façadism and constant erasure of itself, dramatically shifted what I make and why. This world is designed to be viewed at a certain speed, and from a distance. This context inspired my sculpture to emulate hollywood set building strategies and techniques to manipulate ideas of permanence and scale shift.

Inherent to the utopic quest of the American West is the knowledge that such a place or ideal does not exist, and real knowledge lies in the ongoing process of questioning and clarification. The hybridized structures that I create are materializations and remnants of an ideal that never was, and may never be. As fallen monuments to a utopian philosophy, they function as relics of both a good place and no place. They nod towards a bright future and a fallen past, recontextualizing and recombining materials that are both nostalgic and futuristic. An embedded sense of naiveté is inherent to the objects, formed from a bond of sunshine and noir that was repeatedly cooled and heated by urban temperament and artifice. Part architectural, part fossil, part potential, these works utilize discarded building materials that appear to have crystallized within a ‘natural’ process—strata that have undergone philosophical transformations yet to be fulfilled.

Aili Schmeltz (b. 1975 in Davenport, IA) is a sculptor and painter that splits her time between Los Angeles and Joshua Tree, CA. She studied at UCLA, earned her MFA from the University of Arizona, and a BFA from the Kansas City Art Institute. She has exhibited nationally at galleries such as Edward Cella Art and Architecture, ACME, Commonwealth and Council, and Pasadena Museum of California Art in California, Johansson Projects in Oakland, Friedman Benda and Jen Bekman in New York, and Museum of Contemporary Art Tucson; and internationally in cities such as Berlin, Tokyo, Barcelona, London, and Zurich. Schmeltz has been awarded grants such as the Pollock Krasner Grant, California Community Foundation Grant, and Foundation for Contemporary Arts Grant. Residencies attended include the Bemis Center, Sculpture Center, Vermont Studio Center, Scuola Internazionale di Grafica (Venice, Italy), Espronceda Center for Art and Culture (Barcelona), Takt Kunstprojektraum (Berlin), and Babayan Cultural House (Cappadocia, Turkey). Aili is the Founder of Outpost Projects and teaches at Otis College of Art and Design.

The Architects Newspaper, “Artist Explores Ideology of California’s Built Environment” May 22, 2019 Drew Zeiba “The 2019 edition is titled Paradise::Parallax, and the curators’ point of view reflects an evolving conceptual focus that regards the history of the local environment, and the adaptations of flora and fauna — as well as human beings and community — in response to its hardscrabble beauty. ” LINK

Artillery Magazine, “Coming: Joshua Treenial 2019” April 11, 2019 Scarlet Cheng “In the installation ‘Object/Window/Both/Neither’ Aili Schmeltz mounts an 8-foot diameter black disc in the rocks as a disruption in the landscape.” LINK

Artillery Magazine, “Skulpturengarten; Infinitely Malleable Sculptural Practices” October 25, 2018 David DiMichele “…Schmeltz, whose large construction of wood, cardboard and tape (Crosscut, 2011) has much more significant mass than all of the previous artists combined, and alludes to the boxiness of late David Smith sculpture, as well as suggesting architectural references.” LINK

Art and Cake, “Aili Schemltz and Jason Manley at Jaus” July 22, 2018 Lawrence Gipe “Her concrete “Cast Print” series travels in the trajectory started by Bruce Nauman’s 1965 castings of the “air” beneath a chair, through Rachel Whiteread’s interior “ghosts” and Trafalgar Square plinths of the early-2000’s (one critic refers to latter “as a sculpture that both wants to both declare itself, and to disappear,” which feels right in the case of Schmeltz as well.)” LINK

Architectural Digest, “9 Art Galleries That Double as Airbnbs” September 4, 2018 Kelsey Ogletree “Owner Aili Schmeltz has a triple threat at her property set on five acres in the high desert: an exhibition gallery, an Airbnb, and her own home.” LINK

Lonely Planet, “You Can Rent This Art Gallery in Mojave Desert on Airbnb” September 29, 2018 Sasha Brady “The completely renovated mid-century building is home to artist Aili Schmeltz. Set on five acres of desert, with Joshua trees and protruding cholla all around, the space is also an art gallery and an invitation for the larger community to interact with art, as well as for artists to come together, share ideas and find inspiration.” LINK

Palm Springs Life, “Vive La Résistance; A High Desert Exhibition is an Artistic Response to the Border Wall” April 30, 2018 Steven Biller “Schmeltz, who divides her time between L.A. and Yucca Valley, offers her Object/Window/Both/Neitherseries of matte black sculpture that appears to recede as a cutout of the landscape, the negative space obscuring the figure-ground relationship.” LINK

Artillery Magazine, “Pasadena Museum of California Art: Interstitial” July 26, 2017 Anise Stevens “While summoning the supernatural wasn’t Schmeltz’s intention, per se, both of her pieces spur curiosity as viewers examine her mingling of woven yarn with an array of materials that include enamel, wood beads, oak and mirrored Formica.” LINK

Art and Cake, “Interstitial at the Pasadena Museum of California Art; The Meaning In-Between” April 28, 2017 Lorraine Heitzman “Looking like ambitious macramé projects gone astray, these were inspired by psionic generators, apparatus believed to harness energy from the eyes to encourage psychic phenomena.  Schmeltz explores these forms and melds the quasi-scientific with handicrafts to create objects that place the possibilities of ESP within our reach while elevating macramé from its usual domestic context into machines of our imaginations.” LINK

Juxtapoz Magazine, “The Conceptual Works of Aili Schmeltz” December 29, 2012 “Her works are a constant process of research and response to natural events and phenomena that captivate and serve as an impetus to weave these seemingly isolated events into a larger contextual tale.” LINK

Green Prophet: Environmental News of the Middle East, “Save the Cave Dwellers of Cappadocia” May 22, 2012 Tafline Laylin “Gripped by a longstanding love affair with the region, visual artist Aili Schmeltz spent last summer in the Ibrahimpasa village documenting the homes of more than a dozen cave dwellers. She collected hours of audio footage and thousands of images, four of which she has shared with us. Within the next year, she hopes to arrange her work in a book that will help save this priceless heritage.” LINK 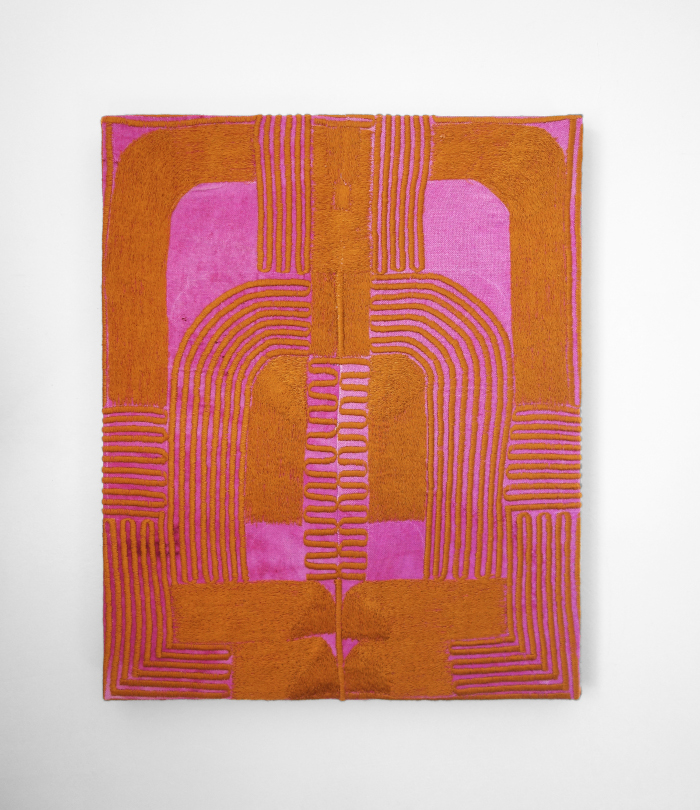 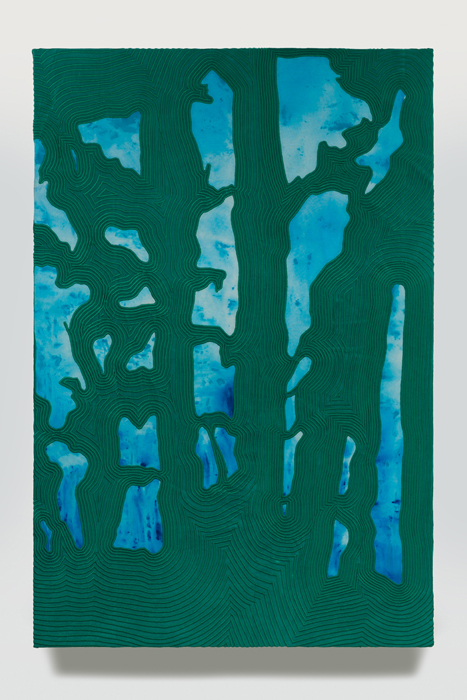 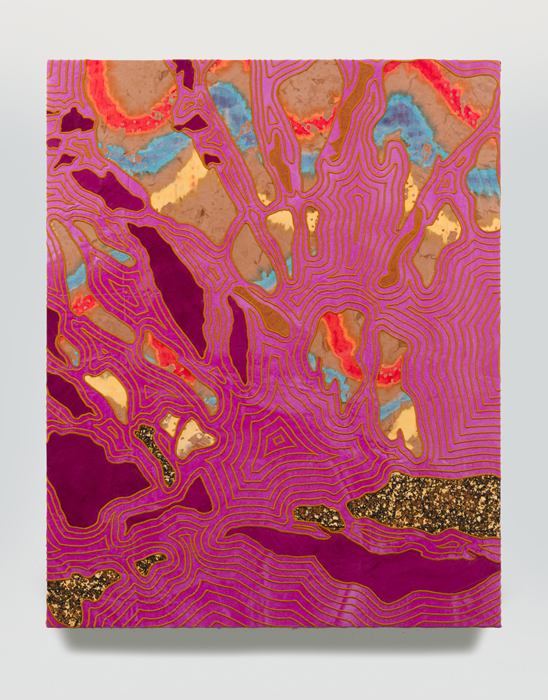 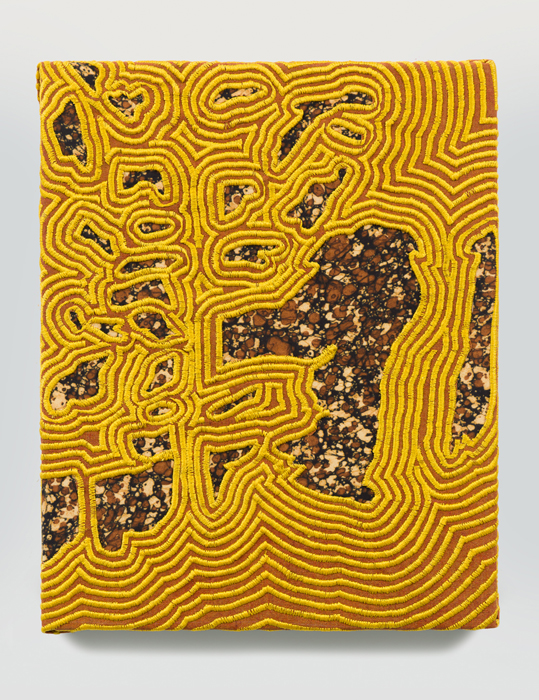 aili schmeltz // Remedy - Acrylic and thread on canvas and muslin over panel; 20" x 16" 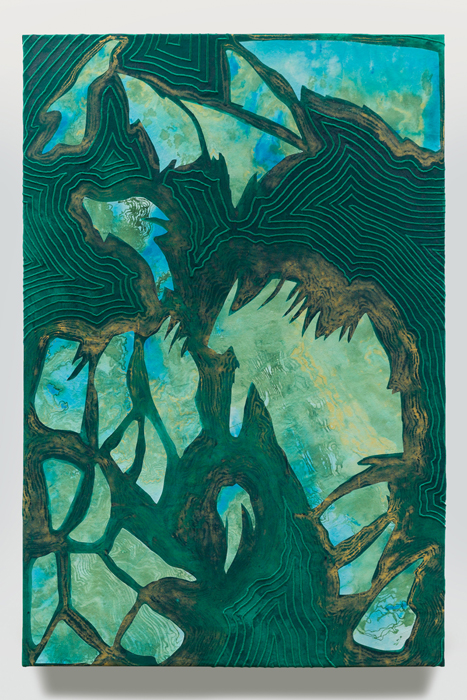 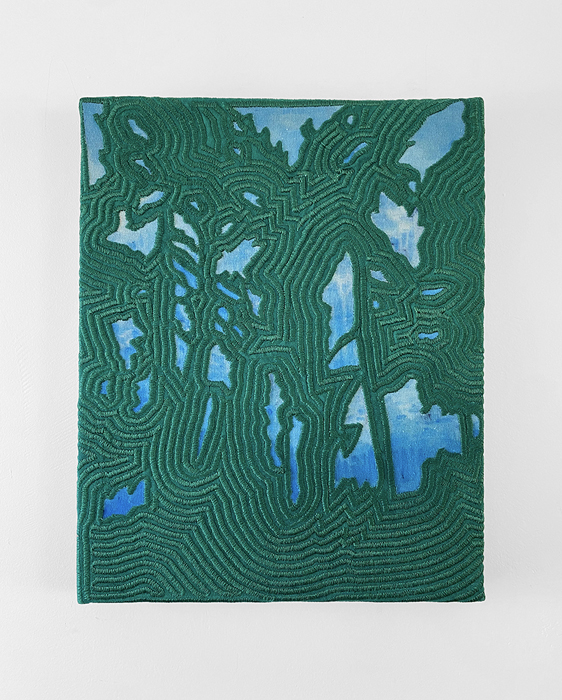 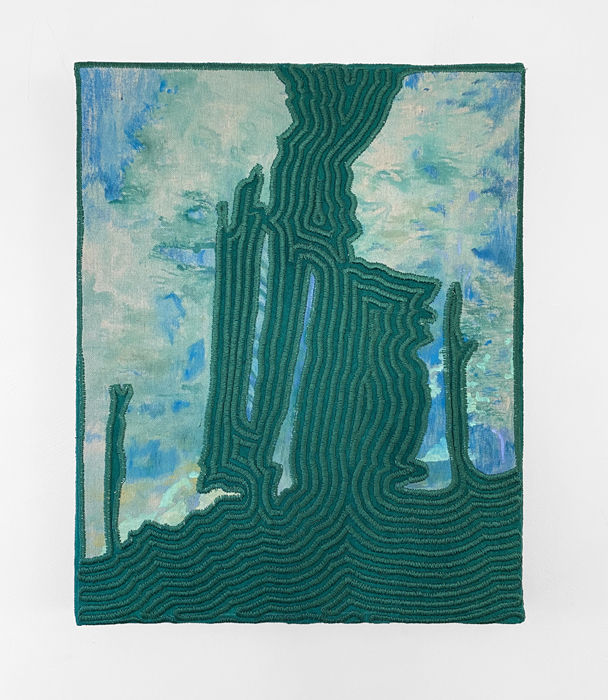 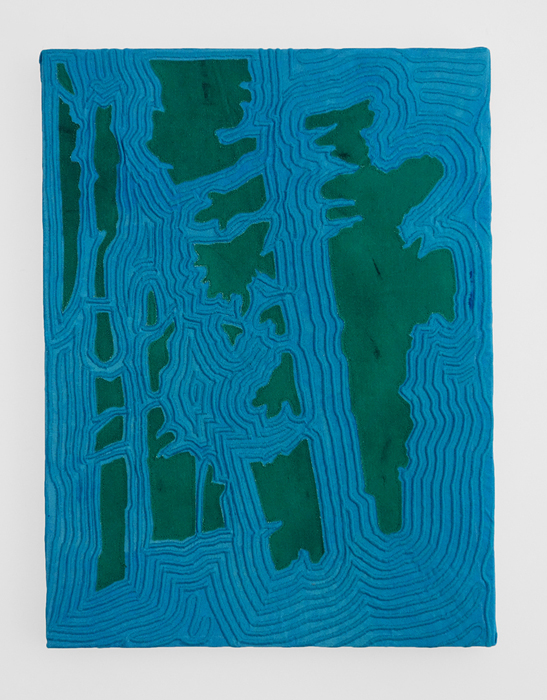 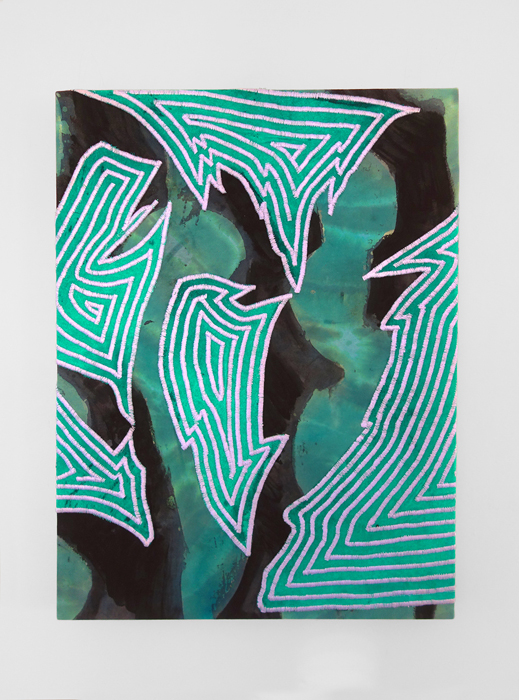 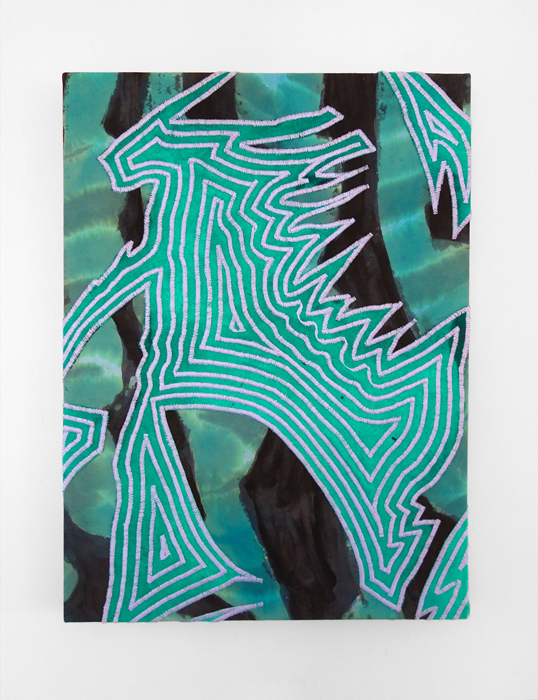 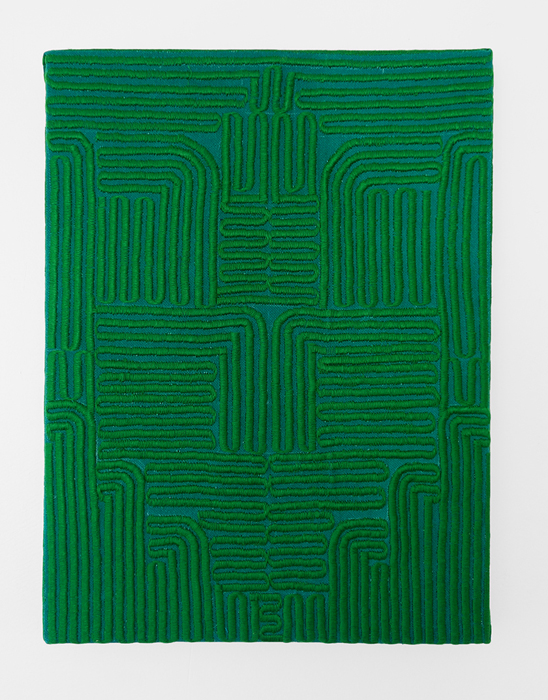 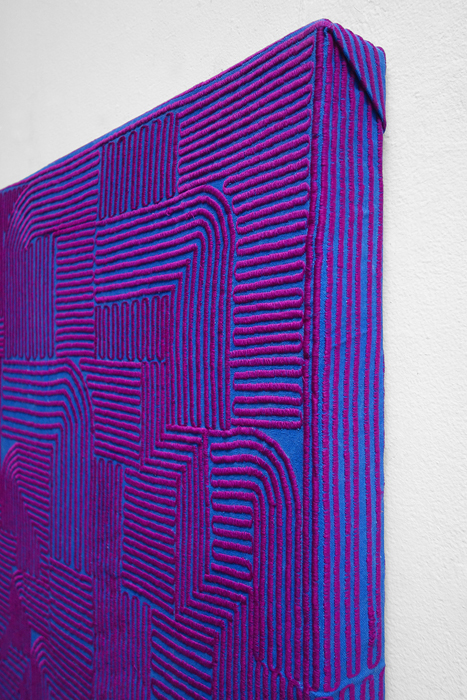 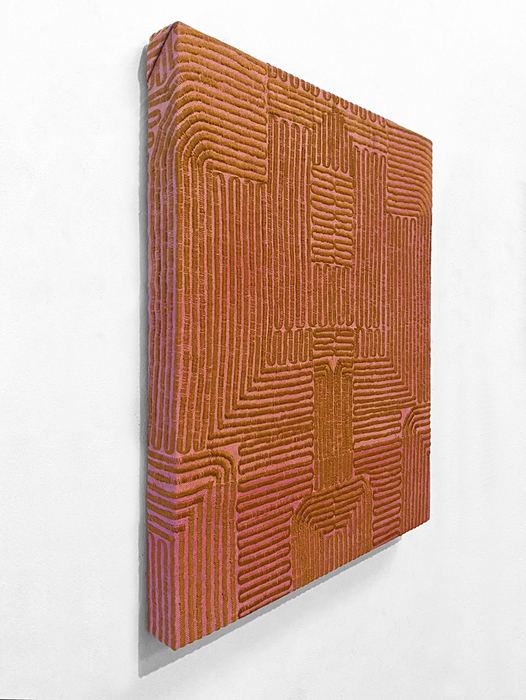 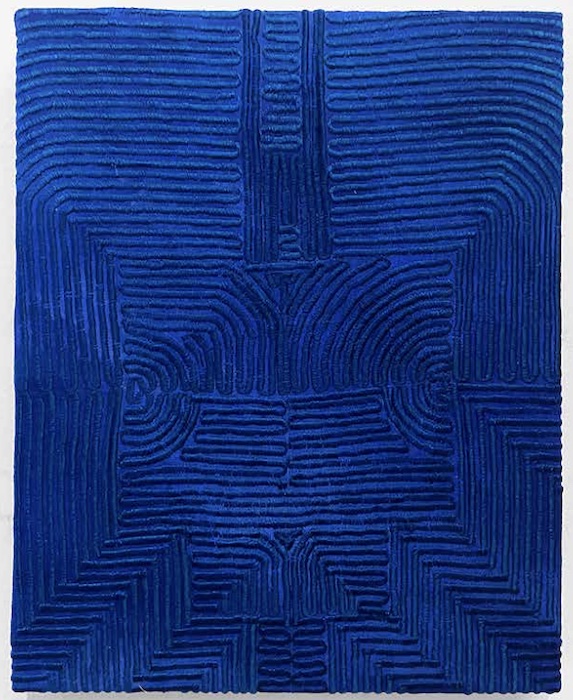 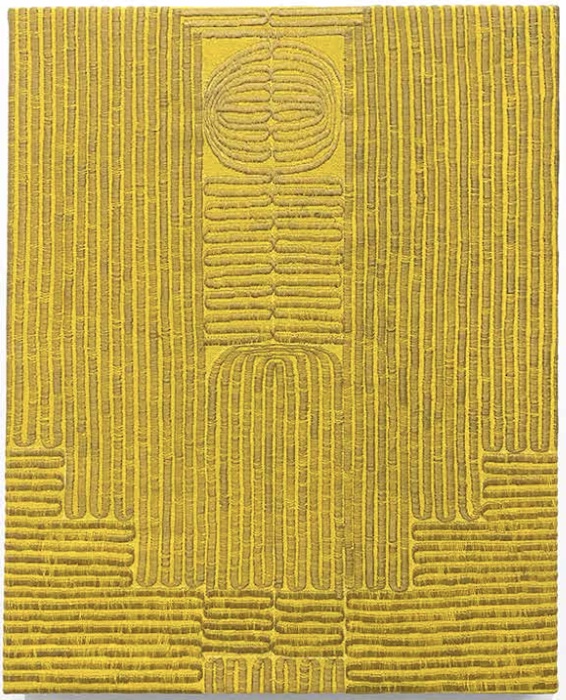 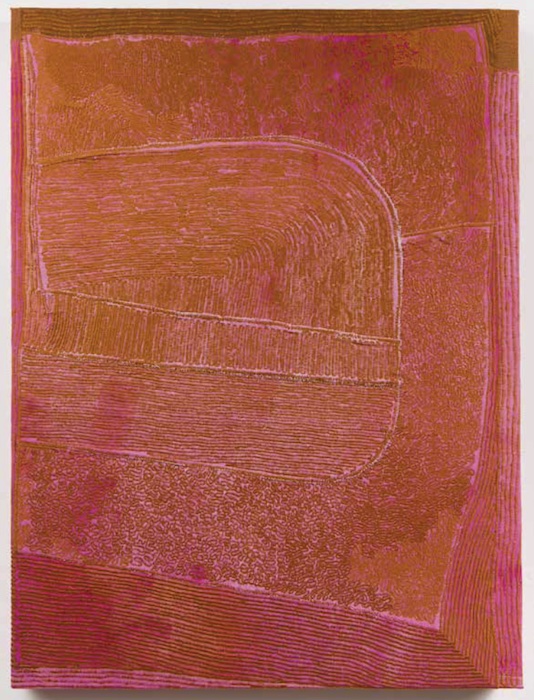 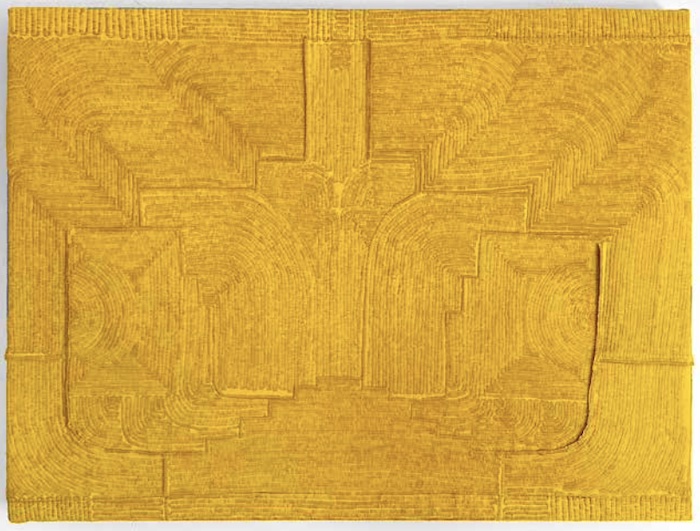 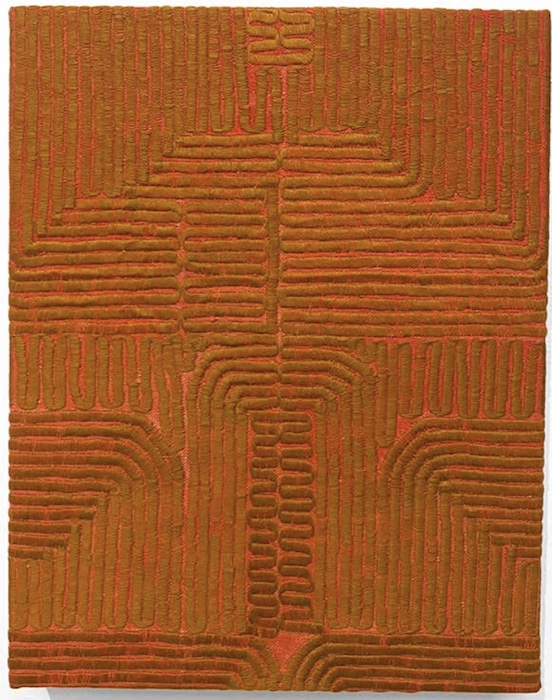 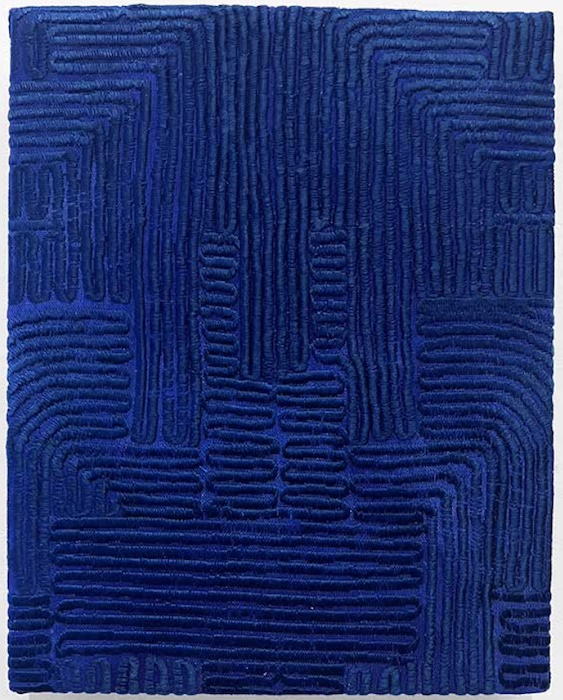 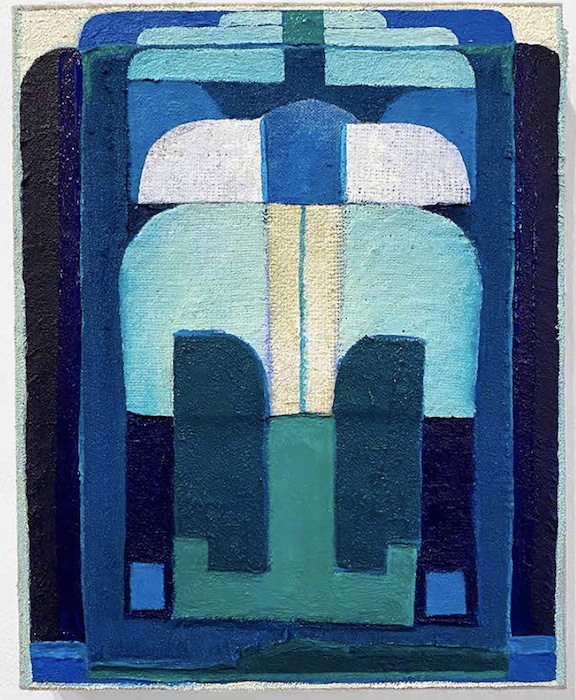 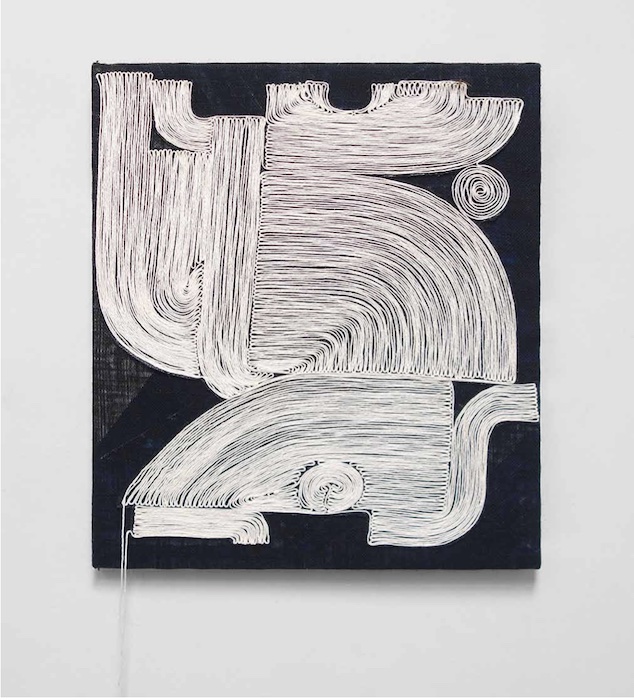 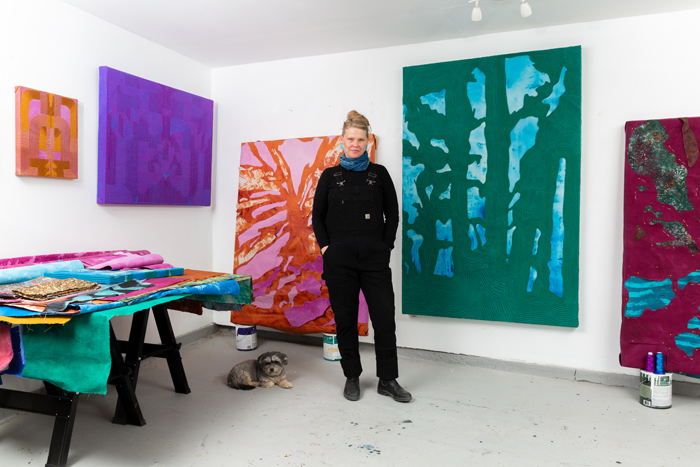